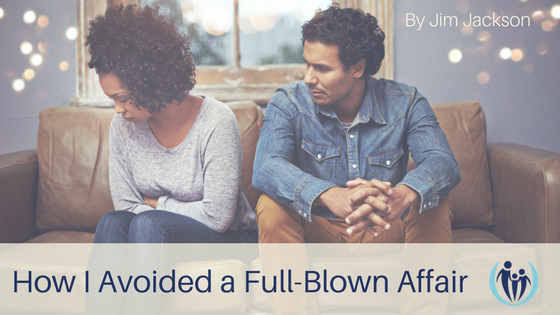 One day, early in my career, I found myself growing attracted to a woman at work. I felt competent and respected in this rewarding and harmonious relationship. It was fun. It was new. It was energizing. I found myself wanting to be at work more. With her more. I didn’t even notice it at first, it was so “innocent” and natural.

My affair had begun.

I noticed her body. I noticed that she smelled good. I looked closely at her hair, and started entertaining distant fantasies about what it would be like to spend non-work time with her. I did nothing suggestive or flirtatious, but my preoccupation had me making “harmless” private decisions to be near her just a little more. Had anyone been observing me, they wouldn’t have noticed my internal struggle.

But I knew, and it started eating at me. It felt both enticing and shameful. As my affection grew in silence my attraction to her became more intense. As the shameful feeling grew, the enticement of the fantasy grew right along with it. I was philosophically, spiritually opposed to what was happening, but my best thinking and reasoning did nothing to diminish the growing intensity. And candidly, deep inside, I liked holding on to the buzz of the fantasy. But I knew something had to change or my choices would begin to have greater consequences. I felt paralyzed.

I kept thinking that as a Christian leader I could somehow get past this. I prayed, “God, take this away.” And I kept thinking, “I’m a grown-up, I can get this under control!” But I could not. This was my crossroads. Knowing that grace does not reside in secrecy, I decided to start talking.

So I told some trusted accountability partners. They were graceful with me, but they weren’t the ones I had hurt. I could tell them, and then hang out with them for a couple hours just like always. It was too easy. I needed the deepest grace. And that could only come from the one I had hurt.

It was time to talk to Lynne. But I didn’t want to hurt her. I didn’t want to lose her trust. I didn’t want to risk having her shut down and shut me out.  I needed to tell her the whole story. I could think of no other way to fully honor our wedding vows. As hard as it was, I knew my confession was the only road to true intimacy and grace.

It would be hard. It would hurt. It would erode trust. But it had to happen for God’s grace to be active in the mess of my emotions and choices.

So I told her. No frills, no build-up. I just said, “I need to tell you something hard. I’ve sinned against you by allowing myself to get attracted to ________ at work. I realized it was a problem when I started making plans to be with her more, and fantasizing about being with her. I’m so sorry. I don’t want anything or anyone to come between us, and I knew if I didn’t say something it could get worse, and I really don’t want it to get worse.” I was getting emotional, and my remorse was deep, but I fought back tears, wanting to focus on the pain I’d caused Lynne, not me. So I stopped talking.

She was clearly stunned. Tears formed as she let the news sink in and she began quietly crying. I waited not knowing what, if anything, she needed or wanted from me. I was ready for anything, and knew I deserved it.

She was quiet for a long time, and after several minutes Lynne collected herself a bit and began to speak. She almost timidly told me that she was indeed sad and hurt, and that this was hard news to hear. She had full rights to dwell on these feelings, to get loud about them, but she didn’t. Then her countenance changed. Her voice was strong and she looked me in the eye. She was taking charge, and she drowned me in grace.

She told me she was glad I confessed! Now I was the stunned one. God’s grace was freely flowing and I was the recipient. I deserved no such treatment – it was unmerited favor. In the light of such grace how could I possibly go on sinning this way? The sails of my fantasy dropped as the wind of secrecy and shame quit blowing.

I was not off the hook. I still had work to do, and trust would take some time to regain. Lynne and I set boundaries for work, and it felt natural to keep them, because of our new layer of transparency. The power of my fantasy was gone.

I’m grateful that God gave me the courage to put grace to the test, and that Lynne chose grace. I’m also grateful that she showed wisdom in not sweeping my discretion under the rug and carrying on as if nothing had happened.

Whether you are the hearer of hard news or the teller, put God’s grace to the test. It will always win if you are both sincere.

Read Lynne’s side of the story.