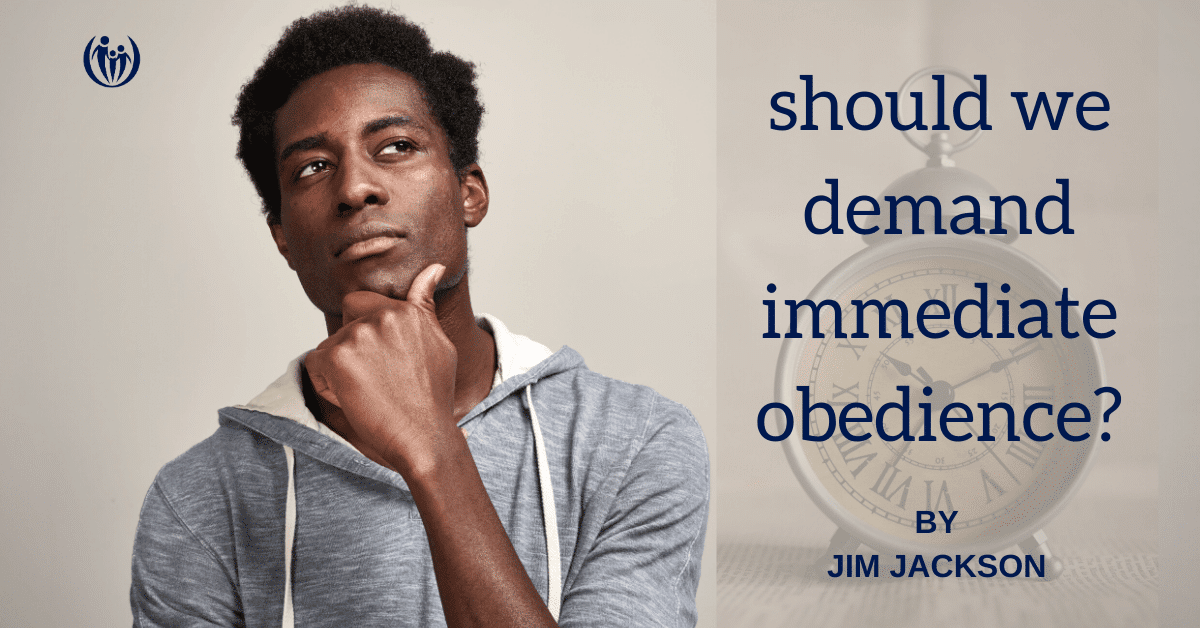 “Delayed obedience is disobedience.” Or so they said.

As a young dad, I listened to teachers that said, “Delayed obedience is disobedience.” Kids should be required to immediately obey all parental requests. That was the common thinking of the time.

I disciplined accordingly. I knew that having obedient kids was a good goal.

And, if I’m honest with myself, I liked the feeling of control and validation that came with having obedient kids.

When our kids disobeyed, I was quick to respond with a rebuke and a consequence.

Our oldest son Daniel was particularly strong-willed and defiant, and I was hard on him. But my approach didn’t have the desired effect.

As Daniel grew from toddler to preschooler, he grew more irritated by my discipline. He became angrier and testier with time.

What did I do? I intensified efforts to “nip this in the bud” by requiring more obedience. Not just any obedience. I required immediate obedience.

“Daniel, delayed obedience is disobedience, and you’ll be disciplined if you don’t obey immediately.”

I uttered these words again and again. Sometimes he complied, and sometimes he did not. We were both generally discouraged by the process.

At some point, I realized maybe I was actually more disobedient than Daniel.

What does the Bible say about obedience?

Yes, the Bible commands children to “obey your parents in The Lord,” (Eph 6:1).

But there was a problem. I forgot there was a verse for me too. I was working much harder on getting the kids to follow their verse than I was to obey the verse aimed at fathers a few sentences later.

It turns out that perhaps the most direct of all commands in the Bible to fathers is found in both Colossians 3:21 and Ephesians 6:4. In short it says, “Fathers, don’t exasperate or embitter your children.”

We love how The Pidgin Bible paints a more vivid picture than our English Bibles: we are warned not to make our kids huhu (crazy)! 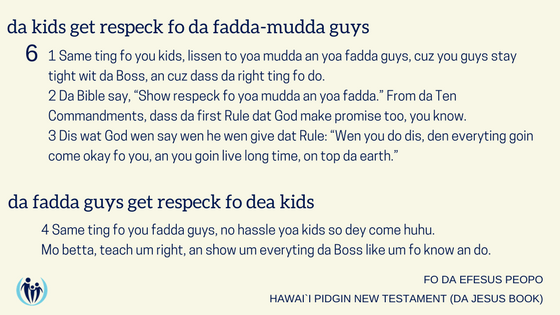 My discipline stemmed from self-interest

I yelled. I stood tall in order to intimidate my kids into submission. I scared them into doing things my way. I sought to emerge victorious.

There was a subtle “I win and you lose” dynamic in my discipline. And I made “losers” of my kids.

I did little to consider what was really best for my children. Instead, I disciplined from a sense of what was best for me. In other words, much of my discipline was selfish!

The saddest thing about this is that two of my three kids largely complied when I acted this way. So I thought my quest for immediate obedience was working. What they were really learning was that submitting to angry people is the way to get along in life.

Since it was “working” with them, I was even more critical and harsh with Daniel. I remember saying about him, “This kid thinks he’s the center of the universe!”

I’m guessing, in retrospect, that if he had the skills at the time, he’d have said about me, “This dad thinks he’s king of the world!”

When teens demand an explanation, before obeying

Nearly every day we coach parents who say, “I just want my teens to obey when I ask them. I don’t owe them any explanation.”

I found myself acting on this thinking one day with my teen son. It was one of those arguments where I didn’t have time to think through my “No!” to him. I just said it so we could keep moving.

(It was back to discipline based on my needs again, in retrospect.)

I could feel a power struggle coming on, so I said, “You can spend as much energy as you want trying to get me to change my mind, but it won’t get you anywhere. I am NOT changing my mind.”

He decided to spend more energy anyway. “But I just don’t get it. You have no good reason!”

I finally played the “because I’m the parent” card and said, “This is one of those times when, because I’m your dad, my no means no. No questions asked, final answer!”

His next response shook me.

He was quiet for a moment and then in a defeated voice said, “OK dad. You win.” He paused. I didn’t like how I felt. He then continued, “But if you want me to respect you, the way I want to respect you, you’ll help me understand your reasons better.”

Daniel spoke for all kids when he spoke these words. Our kids deeply want to respect us. But if what they get is our frequent demands for obedience with little to no explanation, they have no good reason to respect us.

In this case, the only immediacy behind my “No!” was my need to feel in control. By not explaining, I was exasperating him and damaging our relationship. I had not really thought through my reasons and upon further examination discovered my reasons were somewhat selfish.

It turns out I did owe him an explanation, and that explanation helped me reach a more rational and mutual conclusion with Daniel.

Don’t make your kids huhu! (AKA, don’t exasperate them)

As we focus on our own verse, it can be tiring to consistently explain our reasons for various parenting decisions. Or to lovingly watch kids dilly dally in their delayed obedience.

And in one way, the parents who say they don’t “owe my child an explanation for everything” are right. There is no debt to pay here.

But if there is parental selfish motive (which there almost always is), you demonstrate humility and Biblical obedience by focusing on your own verse. Don’t exasperate or embitter your children. Don’t make them huhu.

And for those critical-thinking, constantly questioning teens? There is a great long-term payoff to kids and parents, when parents take the time to state their reasons for their expectations.

If frequent and strong “No!” answers are the norm in our homes, we start to sound like a clanging gong to our kids.

We exasperate them by the constant sound.

The way to avoid this is to help our kids understand our thinking as often as we can.

When we hold ourselves accountable to helping our kids understand, we do better thinking. We are less likely to make selfish demands.

This is how we gain the respect needed. Then when the occasional demand for quick obedience does come, our kids respect it. They know we have good reasons because we’ve proven over and over again that we do.

In order to change, I had to confess this to God, my kids, and my community. But then I experienced God’s grace for me.

We’ve all disciplined selfishly, and fallen short of God’s best for us as parents.

Receiving God’s grace helped me to focus on obeying my verse, more than focusing on getting the kids to obey theirs. Recognizing my disobedience helped to understand my kids’ own journey toward obedience.

I then worked to bring God’s grace and truth to their disobedience too—not in a way that let them off the hook for it, but in a way that built wisdom and reconciliation as I held them accountable.

I learned to live out the full extent of my verse as described so beautifully in the Message, “Fathers, don’t exasperate your children by coming down hard on them. Take them by the hand and lead them in the way of the Master.”

So I modeled more intentionally. I encouraged more. I learned to nurture values and skills that empowered my kids to desire obedience because they valued God’s ways. 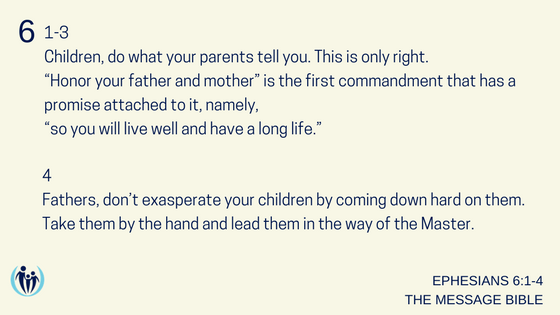 A legacy of grace, instead of demands

I’m so glad I made this shift. Today my kids’ memory of me is not as their dominator, but as their discipler—a loving and graceful daddy. Not perfect, but in Daniel’s words, I was “cosmically safe” (in the big picture of our relationship) to him, because I was faithful to reconcile with grace whenever I slipped back into a big angry power reaction.

What Is the Goal of Your Discipline?