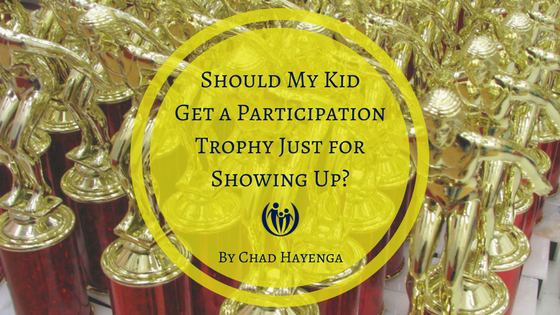 One former NFL player, James Harrison, sent out an Instagram message regarding his two sons receiving “participation trophies” even though they didn’t win anything.

Harrison, the youngest of 14 kids and a two-time Super Bowl winner himself, struck a chord with many who believe that trophies should be given to those who “earned” them and not simply to those who “tried their best”.

There are several things I like about what Harrison wrote: he loves and supports his boys in all they do, he strongly desires them to work harder when they fail, and he doesn’t want them to grow up to be entitled to receive that which they did not earn.

Perhaps participation trophies could instill an attitude of entitlement in kids; however, the other side of the equation could be an unhealthy obsession with winning at all costs and a belief that anything short of “winning” is just not good enough. Over time, this can sometimes communicate to kids that they are not good enough.

In my family, we put very little emphasis on being better than anyone else in sports or in any other area of life. We did, however, emphasize the importance of using God’s gifts and talents to the best of your abilities.

I always appreciated the saying, “Hard work beats talent, when talent doesn’t work hard”. The saying resonated with me because I was never the most talented athletically or academically, but I never wanted to be outworked or fail because of a lack of effort. Not to mention I actually had control over my effort!

In Colossians 3:23-24 it says, “Whatever you do, work at it with all your heart, as working for the Lord, not for human masters, since you know that you will receive an inheritance from the Lord as a reward. It is the Lord Christ you are serving.” In other words, when we do work it should be about putting forth our best effort to serve God, and not about any earthly reward.

Additionally, studies have shown that affirming kids’ hard work and effort over time helps them to learn to value hard work and attempt more difficult challenges, while affirming traits as if kids have no control over changing them (like “you’re smart” versus “you worked hard”) can actually lead them to be more fearful of failure.

So whether you support the giving of participation trophies or not, let’s make it a point to emphasize the effort of our kids as opposed to the outcome. It’s not that the outcome doesn’t matter — just that “working for the Lord” matters far more.

To learn more, register for our online course The Entitlement Fix: Growing Hard Work and Gratitude In Your Kids!

This fast-paced 4-session course is designed to give parents a solid strategy for stamping out entitled attitudes, and moving toward greater meaning in life.

You’ll learn to take your kids through a simple process for helping your family have constructive conversations about rights, responsibilities, and privileges in your home. You’ll learn graceful responses for the inevitable conflict that emerges when parents confront selfishness.  Most importantly, you’ll learn a perspective that grounds all your efforts in eternal truths from the Bible.

Join us today! At $23, we believe this is a fantastic value. If this is still out of your reach, simply contact us for a scholarship.