Is Your Child Intense and Impulsive? So Were God’s Chosen Leaders. 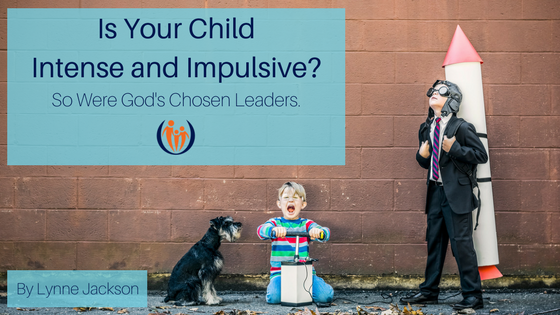 When God decided which of his children would be key leaders he avoided the step-in-line, shiny-looking ones. In fact, when we look in scripture at some well-known “Bible heroes,” we see that God chose some serious screwups to guide his precious people:

Two murderers and an ADHD poster child. Not exactly a crew that we would expect to give spiritual leadership seminars or impress the religious elite.

Why did God choose them? Because all the intensity and passion behind their “misbehavior” could be re-directed for Kingdom purposes.

But also because these men received deeper grace because they sinned in such terrible ways. Romans 5:20 says that “where sin increased, grace increased all the more.” They absorbed the depth of God’s true character. God’s grace and love infused their souls because it had been lavished on them in their darkest moments.

Paul was the lone defender of the true gospel on the planet at one point, standing up to even the original apostles as they started the slippery slide into legalism (see Galatians 2:11-14). Why was he so passionate about protecting the true gospel of God’s grace? Because he received that outrageous, lavished grace when he was the “chief of sinners.” The worst sinner best understood God’s grace.
Look past your children’s mistakes to their great potential in God’s Kingdom. Lavish grace and mercy (not the same as passivity/leniency) with your discipline. Don’t just punish, but re-direct kids’ passion and intensity for God’s purposes.So what would these three saints tell us about parenting?

Your ebook is being delivered to your inbox right now! Members of our mailing list receive one power-packed, grace-filled email per week. We hate spam & never sell our list.