When It Comes to Expressing Love, Timing Matters! 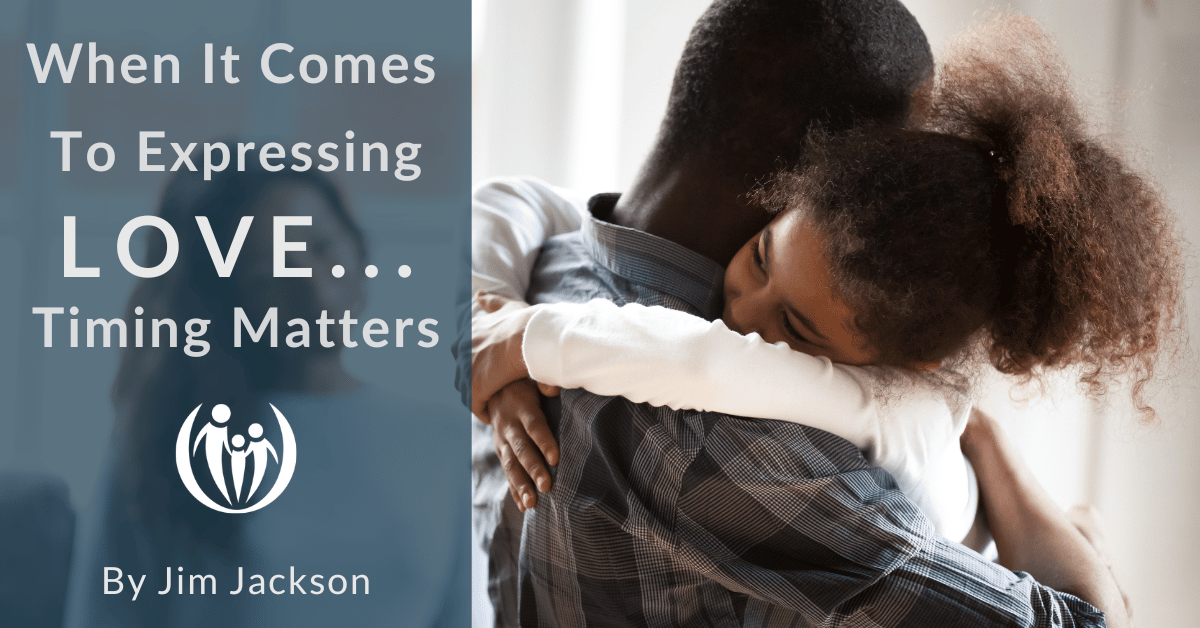 If you ask most parents, they would say it’s important to love children unconditionally. But in practice, sometimes that’s harder than it sounds!

What exactly is unconditional love? What does it look like?

One thing’s for sure — unconditional love is not praise for positive behavior. When I express love in any context where children can possibly interpret my affection as conditional (based on their behavior), it loses its power as an expression of love!

When this happens over time, children can begin to believe that love is earned. For example, I once worked with a teen who reported that the only time her father expressed affection for her in her early years was when she got dressed up. She grew up believing that she was lovable only when she looked pretty. She was very conscious about her appearance, and struggled with self-esteem and eating disorders as a teen. Another young man related how his dad would show up at his football games and beam with pride, but it was the only time this young man received affirmation or affection from his dad. When an injury forced him to quit football, his resulting despair led to depression and thoughts of suicide. In his mind, there was nothing about him to love anymore.

Unconditional love is devotion and affection for someone, regardless of his or her behavior, appearance, performance, or ability to meet my needs. Even sometimes in spite of those things.

This means I affirm my children simply for who they are, not for what they do. When my first child was born, I was overcome by emotion as I whispered to him, “I love you; you are a miracle, a gift, you are infinitely valuable.” Learning to communicate these messages throughout my children’s lives is the essence of unconditional love.

The messages we communicate are important — but the timing of my communication of love to my children is critical, too. Hugs, smiles, and “I love you’s” consistently given only in response to positive behavior can breed insecurity and a performance-based sense of self-worth in children.

If I want my love to be understood regardless, I will be thoughtful about communicating my love during regular routines, such as bedtime or returning from work. I will intentionally communicate love messages when the children are not doing anything particularly noteworthy. In addition, I will even see times when they have “messed up” as unique opportunities to powerfully communicate a message of unconditional love. The less children feel they deserve love, the greater the impact of lavishing it on them anyway.

One year in the Jackson household, a huge variation in the grade point average of our children’s report cards left one of them quite discouraged. This child’s dejection made it obvious that this was a great opportunity for encouragement and to communicate to all three children that our love for them is unrelated to their success. We decided to have a “Report Card Party” to celebrate our children regardless of their grades. Problem-solving about raising the low grades could wait till later. We had a special dinner and then ran around the house like loonies, whooping and hollering and firing Nerf guns at each other. We all had a blast, but the child with the lowest grades seemed to have the most fun!

Jesus’ parable of the father’s response to his prodigal son depicts powerful love in response to a child who had sunk to the depths of failure (Luke 15:11-32). The watchful father longs for the return of his lost son. When he finally sees him he leaps into unmistakably loving action. Running to the child, he greets him with a joyous embrace. He then throws a great welcome party to honor his returned lost son. This story challenges us to look at the times when our children blow it the worst and ask ourselves if we have a heart of unconditional love for them. This love is unwavering – ever providing, defending, nurturing, comforting, and forgiving. It says, “I’m here for you, no matter what” (2 Timothy 2:13). “I want the best for you” (Jeremiah 29:11). “Nothing can separate you from my love” (Romans 8:38-39).

Take 10 to 15 minutes to find out your strengths and challenges with our free parenting assessment.