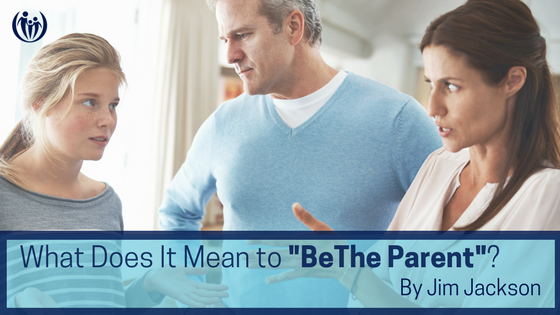 Parents frequently say, “It’s my job to ‘be the parent’, not my kid’s friend!” Or, “My kids need to learn that I don’t have to explain everything. Sometimes they just need to know that it’s time to obey without explanation, because I’m the parent!”

These statements beg the question, What does it mean to “be the parent?”

Most parents tend to answer this in a powerful, autocratic sort of way, when they want to be firm about something. It’s a parenting posture I relate to. It reminds me of an interaction I once had with my teen-aged son. He wanted to do something I didn’t want him to do. It wasn’t a bad thing, just not something I wanted to support. So when he asked, “Dad, can I do it?” I quickly said, “No!”

Of course he wanted to know why. And he was persistent in wanting to understand. His challenge fueled my energy to “be the parent.” I was not about to back down. “Son, you can spend as much time and energy as you want trying to get me to change my mind. But this is one of those times when, because I’m the dad, my no means no!” He got quiet.

Satisfied I’d gotten through to him I transitioned toward my next activity. My son then sighed, drawing my attention. “Fine!” he proclaimed, “You win.” He paused. I was speechless, not knowing how to respond. He was right. I had won, but upon reflection I didn’t feel very good about it. He then continued in a very calm and reasonable tone. “But if you want me to respect you the way I want to respect you, you’ll help me understand your reasons better.”

I could have heard this statement as a further challenge. I could have held my position that he needed to learn to accept my no without explanation. I’m a firm believer that there are times when that answer is justified. But as I pondered what was unfolding, I had a sense that this was not one of those times. There was no imminent danger or urgency. There was no defiance on his part, just a strong desire to understand. When pressed, I had to admit I hadn’t really thought about it. I just didn’t want to work that hard. Not a very good basis for “being the parent.”

I realized that my son was raising a valid point, and that without a reasonable explanation, I might actually lose his respect. After all, respect is not a given just because I’m the parent. So I decided to earn some respect. I felt I owed not only my son, but myself a better explanation. When I sorted it out for myself and let him into my thinking, he understood. My answer didn’t change, but in the end I had gained far more respect than if I’d just stood my ground in the name of “being the parent.”

This incident compelled me to do some deeper thinking and digging into what it means to “be the parent.” Here’s a summary of what I concluded:

1. We are all imperfect parents.

Are we willing to admit that our need to “be the parent” may be more about selfishness and pride than about what is best for our kids? It may be that “No means no because I’m the parent,” is more truly rendered, “No means no because I need to feel respected or in control,” or, “I don’t want to take the time or energy to think about this and if I did, it would probably reveal that I’m more concerned about my own needs than I am in guiding you into wisdom.”

Humble, rational thinking about what’s going on in our hearts give us an opportunity to “take every thought captive to the obedience of Christ” (See 2 Cor 10:5). When parents model this kind of obedience, and talk it through with their kids, the kids learn to do the same.

2. The scriptures’ primary model for us is that behind God’s commands are reasons rooted in the person of God – who is perfect.

3. The road to obedience is paved with trust.

God is trustworthy and has proven it over and over again. We obey God because we trust God. Similarly, the way to become trustworthy in another person’s eyes is not by requiring blind obedience, but by teaching the wisdom behind the requirement. As kids trust their parents, they grow to choose behavior not for fear of consequences, or hope for reward, but because of trust and conviction about what is right and wrong.

I earn my kid’s deepest respect when I strive to stay humbly accountable to the above three principles. That’s the essence of “being the parent.” Then, and only then, if I find it necessary to issue a strong and firm “No!” without explanation, will my kids be inclined to trust and obey. Giving thoughtful consideration to these ideas turns out to be more work sometimes than I’d like it to be; but this is what “being the parent” is all about.