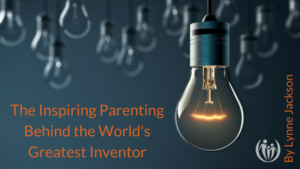 We have him to thank for (among other things) the phonograph, the first motion picture camera, and the lightbulb, about which he famously said of his many failed prototypes, “I have not failed. I’ve just found 10,000 ways that won’t work.”

But we’re interested in a less famous quote of his: “My mother was the making of me. She was so true, so sure of me: and I felt I had something to live for, someone I must not disappoint.”

You see, as a child, “Tom” Edison was seen as a difficult child with a learning disability (dyslexia). His strict teachers didn’t understand why he couldn’t memorize and recite his lessons like the other children, and referred to young Tom as “addled” — a catch-all term at the time to mean that he was mentally incapable. This caused Tom to storm out of class one day, heading home to his mother.

Many parents may have simply seen a child failing at school and “playing hooky” — “Thomas, what are you doing out of school? Why aren’t you doing your homework? Why aren’t you obeying your teacher? You’re grounded!” — but Nancy Edison could see past the struggles young Tom was having. She could see that beneath Tom’s outward misbehavior he simply had a “gift gone awry” — a brilliant mind that struggled to fit into the schoolmaster’s box and was thoughtlessly labeled disobedience.

Thomas Edison’s biography records how his mother responded to her son with vision and faith. She went to speak to the teachers, and it is clear the impact this had on young Tom:

“My son is not backward!” declared Mrs. Edison, adding, “and I believe I ought to know. I taught children once myself!” Despite her efforts, neither [of the teachers] would change their opinion of young Tom Edison. But Mrs. Edison was equally strong in her opinion. Finally, she realized what she had to do.

“All right,” Mrs. Edison said, “I am hereby taking my son out of your school.” Tom could hardly believe his ears! “I’ll instruct him at home myself,” he heard her say.

Tom looked up at his mother, this wonderful woman who believed in him. He promised himself that he would make his mother proud of him.

You can just hear and imagine the sense of value and love that Tom felt. What a gift!

If your child is struggling in school, you can advocate strongly for them whether you homeschool or not. We know one mom of a child with severe learning disabilities who even pulled her son out of school every week during the spelling test he could never pass (no matter how hard he studied) and took him to learn about something he was excited about or develop a strength he had.

As we interact with our own children — whether they have learning disabilities, sensitive nervous systems, or are just having a tough time handling their own intensity — may we, too, look for the “gift gone awry” in their behavior and respond with our love and faith in them.

P.S. For resources related to special education needs, check out PACER in Minnesota, or ask at your child’s school to find out what resources and support are available in your state.

12 Misbehaviors and the Gifts-Gone-Awry Behind Them

Do You Have a Positive View of Your Child’s Future?