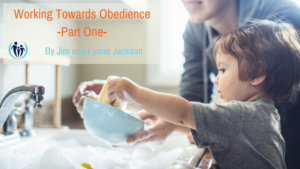 Eli is not quite two. He is the son of a friend that is staying with us. I experimented with him this morning – in a fun sort of way. I was trying to enlist his help bringing dishes to the kitchen from our den. I wanted to learn about what motivates him to obey. Everything I said in the following “experiment” was said in a relaxed, and pleasant tone.

In summary, here’s what happened:

At first glance, this may all seem pretty simple. And maybe it is. But we can’t help but wonder, what’s really happening here? What did Eli learn? Did he get away with disobedience? What if the encouragement had been met with resistance? What is the Biblical way to help children learn obedience?

We’re going to address these issues in our next email. In the meantime, we’re inviting you to do at least one thing, and hopefully another.

First, try this with your younger kids. Just to see what happens. We’ve found that kids seem to better respond to our authority when we make better efforts to encourage rather than command. There is something powerful in the notion that “I decided to do this” rather than “somebody else decided I should do this.” We’re not at all suggesting that there aren’t times when parents ought to expect immediate obedience. We’re suggesting that when we put much effort into encouraging our kids, they will be more respectful of our occasional firm commands.

Second, when you try this, tell us your story. Include what happened? How did you feel? What, if anything was different about your child’s response? What did you learn and what do you think your child learned? Your input will contribute to our next email.