“I will love you simply because you are my son.” 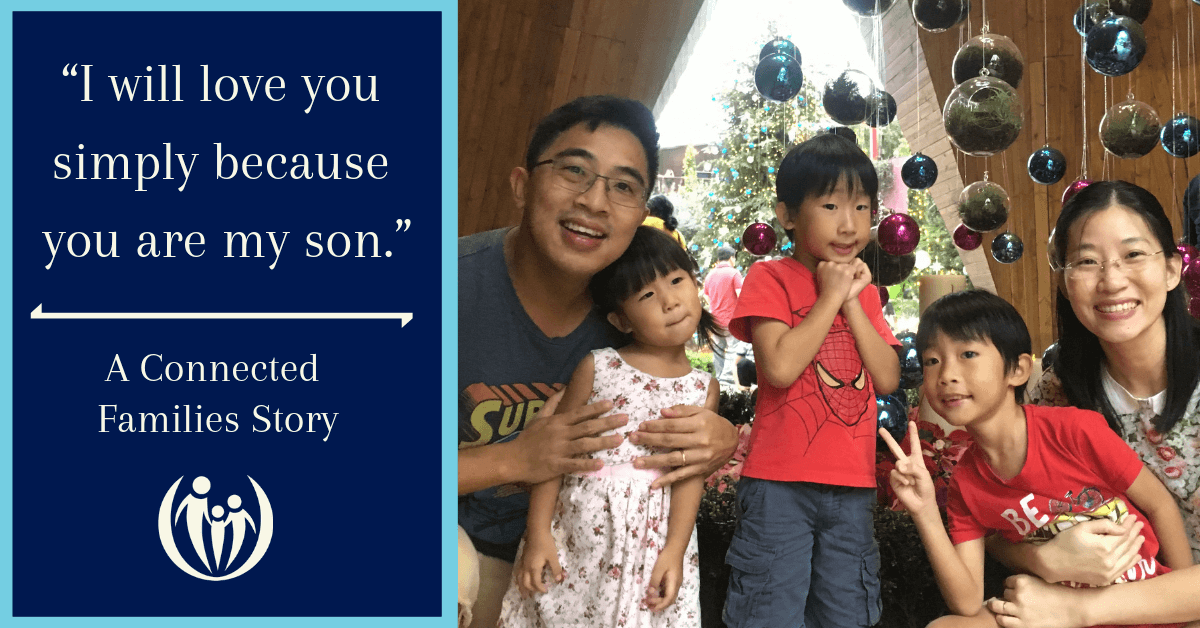 One of the things we love most at Connected Families is when parents contact us to tell us how our resources have made a positive impact in their parenting journey.  Check out this letter from a dad (Royston)* living in Singapore. With encouragement from his wife, Royston began reading Discipline That Connects and implementing the Connected Families framework when disciplining his children. This story tells of some of the remarkable changes he experienced in his family and in his own heart.

About a year and a half ago my middle son Thaddeus (6) started to say unkind things to me when he got upset. He would say things like “Daddy I don’t like you.”, “Daddy I hate you!” or “You silly old man!”. The first time it happened, I chided him and told him that it was very rude and he cannot say such things.

When I examined my initial feelings, I knew that my response came from a sense of embarrassment. I wondered what people would think of my parenting if my child was saying such unkind things.

The next time he got upset and said those things again I was ready to respond differently. I had thought about my relationship with God and how He loved me despite my numerous failures and unfaithfulness. I responded to Thaddeus by telling him that despite his unkind words, I still loved him.  But he responded to me, “I don’t love you.”

Oh man, the difficulty level just went up a notch! Thaddeus didn’t respond the way I thought he would. Wasn’t my response already a gentle one? Shouldn’t it have turned away wrath as mentioned in Proverbs 15:1?  Somehow my response must have been from the Holy Spirit because there’s no way that I could have thought of it by myself. At least not at that moment.

I told Thaddeus this…“Teddy, It is not important that you love Daddy. What’s really important is that Daddy loves you.” After telling him that, he still had a pouty look but I just left it at that.

Later, when he was calm, I explained my response.  I said, “Teddy, the reason why Daddy will still love you even if you tell me that you don’t love me is because Daddy has sometimes done the same thing to God the Father. But God still loves me all the same. And I, as your Daddy, I will do the same for you like what God has done for me. I will love you simply because you are my son.” 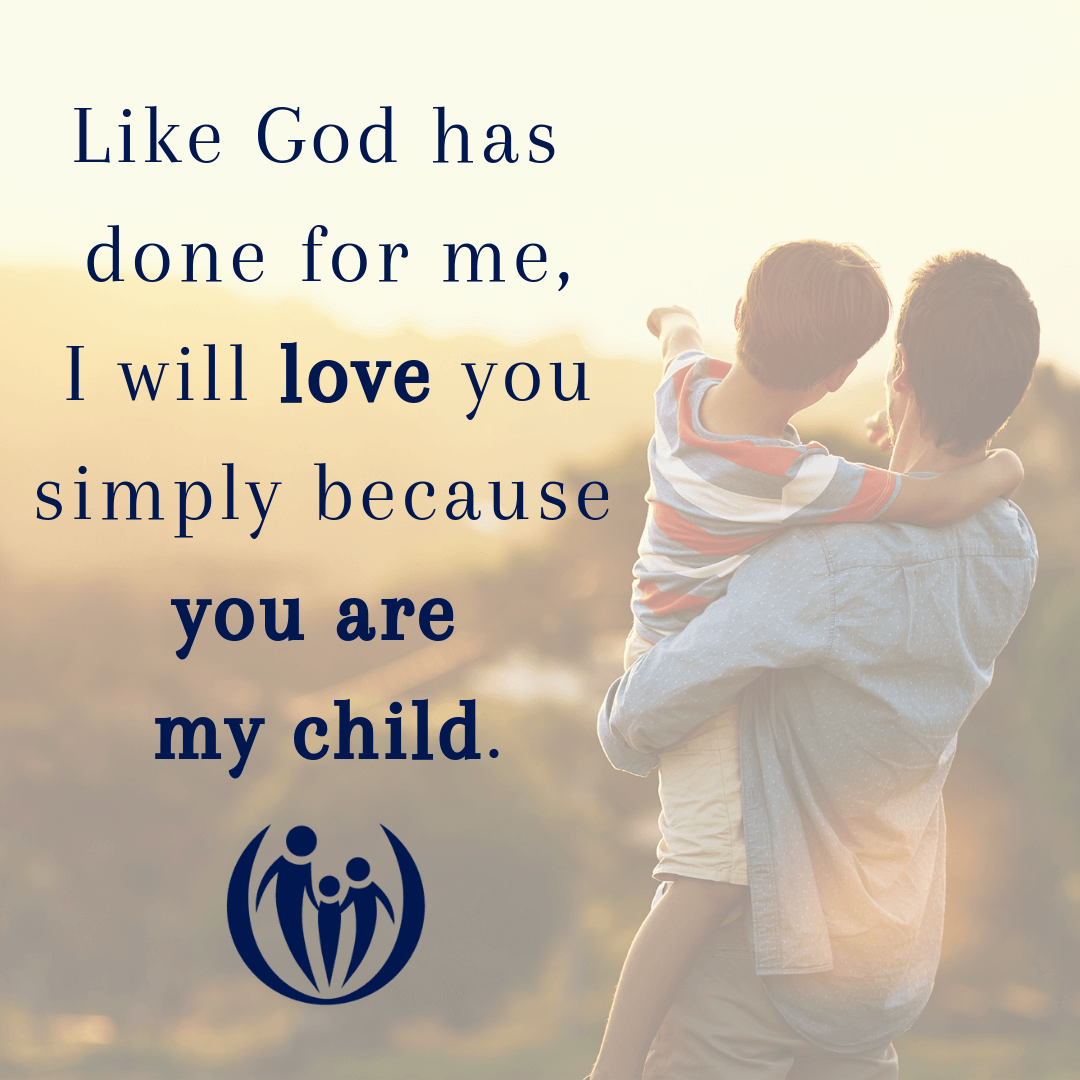 I wish that I could tell you that everything was fine and dandy after that conversation but it wasn’t. Thaddeus still said the same things and I responded the same way again. I also knew that if I changed my response it would simply mean that all that I had previously said were lies.

The breakthrough finally came after many months.

One Sunday after church, Thaddeus requested for me to bring him to the playground across the road and play with him. I was reluctant because Singapore’s weather is very hot and humid and the playground is outdoors.However, I relented because Thaddeus is our middle child and I want him to know that his desires are important to us.

After twenty minutes of play under the hot sun I told him that time was up and we needed to go back to church to find mummy. I thought that he would fuss and insist on playing longer but surprisingly, he willingly ended play! I picked him up in my arms and I and our conversation went like this:

“Teddy, Daddy loves you. Do you know that?”

Thaddeus answered, “Yes, Daddy, I know you love me.”

Oh what a great and wonderful response!

I followed with another question “Teddy, why does Daddy love you?”

Oh man…  his response made me feel like I was standing on holy ground.

Thaddeus simply said “Because I am your son.”

My initial thought was whether Thaddeus had understood what he just said.

So I followed up with another question:

“Thaddeus, does Daddy love you because you did the right thing or you didn’t do the wrong thing.”

Thaddeus said, “No, it is because I am your son.”

My heart leaped with joy that a 6-year-old boy could grasp God’s truth!

I wish I could tell you that Thaddeus never again said unkind things but that didn’t happen. What happened was something different.  Something shifted in my own heart. I now understood that modeling God’s Love IS TRULY the way. Deuteronomy 6 is really about living out my relationship with God before my children. Even though Thaddeus still says unkind things from time to time, my heart tells me that his heart will slowly yield to saying words of affection which we are starting to see more often! 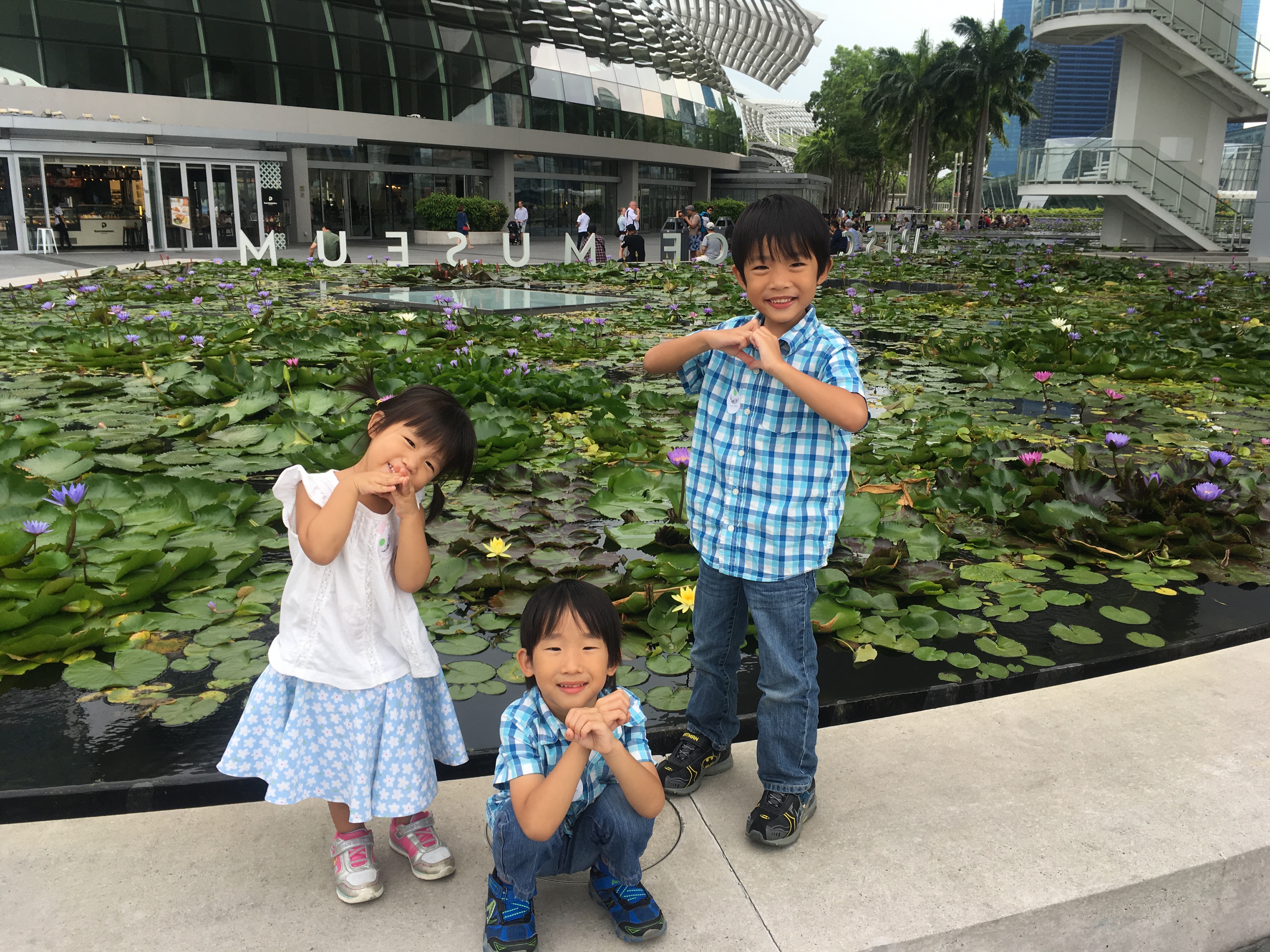 Do you see how instead of reacting angrily to his son’s behavior Royston was able to feel and express compassion? None of this made it OK for Thaddeus to say hurtful things, but it paved the way for constructive conversations about the behavior AND about God’s deeper love! This is how the Gospel comes to life in the messiness of parenting.

So the next time your child says unkind things when upset, pray for compassion on the child and the wisdom of God’s Spirit to guide you. Let us know how it goes. If it’s hard to do this, let us know that too. We’re here to help!

Check your email inbox in about five minutes for a confirmation message. If you don't receive it, check your spam folder and whitelist info@connectedfamilies.org. If it isn't there, you likely accidentally gave us an incorrect address. Oops! Try again! :-)