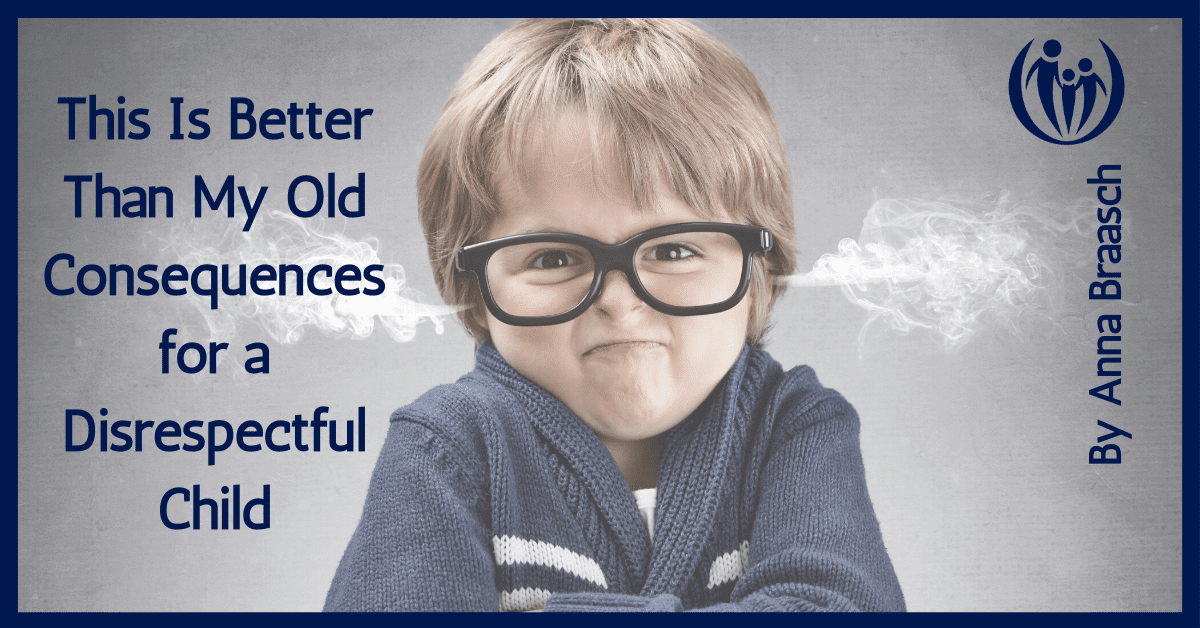 I don’t know about your consequences for a disrespectful child, but mine usually follow a certain script.

This following scene has played out hundreds of times between my son and me. We know the scripts and we play the parts well. Too well.

A typical scene opens on my 9-year-old son, who is outside playing with his neighborhood friends, making up fantastic make-believe games or throwing the football or shooting hoops. I love our neighborhood and I love that he has the freedom to be a kid. This is what I want for him! It’s a 9-year-old’s dream come true.

I call him inside to do something responsible like eat a meal, get ready for practice, do homework, take a shower. He explodes and tells me I’ve ruined his life.

I get it! Rather than seeing me as his protector and nurturer, I am seen as the killer of his fun! But even though I know this, sometimes I can’t help exploding into my “Scene Two” response: “I am NOT ruining your life, and you are being disrespectful! There are consequences for your rude behavior—you are grounded from playing outside tomorrow!”

He argues, I argue back, and he stomps off to his room, both of us still steaming from the ears.

We perform our two-person show frequently, but it was a little different last time…

On the first day of school, his anger about the end of summer was simmering just under the surface as he got off the bus. I thought some good active movement would be the best thing for him. After a quick hello and goodbye he was off to play with his friends.

But when I called him inside 45 minutes later to eat a snack and get ready for football practice, his anger that had been simmering all day exploded on me. “Mom, you ruin everything!!”

Everything in me wanted to start Scene Two as written in our familiar script: I wanted to go toe to toe! I wanted to let him know how disrespectful he was being, and that there would be consequences for a disrespectful child! But I knew this wouldn’t draw us closer. So I stayed calm, took deep breaths, and told him I’d be waiting for him in the car.

Connecting, instead of fighting in Scene Two:

After a few minutes he joined me and we drove, in silence, to football practice. I knew that I wanted a different ending to this play we’ve rehearsed so many times. About halfway there, this is the conversation that happened.

Me: Hey, honey, I’m really glad I had a chance to calm down and pray before talking to you. I’m not OK with what just happened and I think I’ve figured out how to talk with you about it. I don’t want what I say to make you angrier so you can ask me to stop if you want and we can talk about it later.

Me: You know how Dad and I are best friends, and we adore each other and have a great relationship. Sometimes when I am busy at home – like making food, filling out forms, cleaning up messes – and Dad walks in after work and asks a simple question or makes a simple request, I blow up! I’ve come to realize it is because I don’t feel connected to Dad at that moment and so the littlest thing can make me feel so angry! Now, when I start to feel that way, I can recognize that Dad and I need to spend some time alone, talk, and re-connect again. Does that make sense?

Me: So, I think that is what happens with you and me. You are out having a great time with your friends – and I am so glad you are able to have such great neighborhood friends and are able to play outside with them. But then I am inside doing all the things that it takes to keep our house running and taking care of you and your sister. I love doing those things but sometimes I start to feel more like a housekeeper rather than your mom, and I feel disconnected from you. And then when you stomp in the door and say the types of things you said to me today, that drives an even bigger wedge between us. I don’t want our relationship to be like that. Do you?

Me: You know there will be a consequence for how you treated me earlier today.

Me: Instead of playing with your friends after school tomorrow I want you and me to hang out and do something fun. But here’s the thing… I want you to come up with the activity you want to do with me. Maybe come up with three ideas and we’ll choose one together.

Son: I can take you on a date!

Son: No! I want to pay! …Can you help me with my shoulder pads?

While we were standing near the practice field after shoulder pads and helmet were on, he tried to kiss me through his helmet – which is nearly impossible and very funny. (Try it if you have a football player in the house!)

My child’s consequence for disrespect

The next day my son did take me on a date to Dairy Queen, where he announced that I could order anything I wanted. We played Uno for 45 minutes, enjoyed our ice cream and didn’t talk about anything serious. Just what we needed.

In the last week since we went on our date, it hasn’t been perfect, but our after school interactions have been much more peaceful and respectful. And most importantly, my son knows that I love him no matter what, even when he’s disrespectful.

Take 15 minutes to learn how to give consequences that teach, rather than simply punish, by downloading our free ebook Consequences That Actually Work.