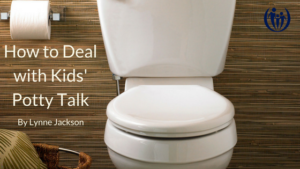 Few things get parents’ attention as quickly as kids’ potty talk! Recently I worked with a family whose two boys, Will and Logan (ages 5 and 3), were frequently finding hilarious entertainment in each other’s potty humor.

But parents John and Patti weren’t laughing – they were exasperated with their boys’ potty talk. When I checked in with them before our first coaching session, their goal was for the kids to “listen, obey, and have a healthy fear of us,” and John defined effective discipline as “hot sauce or soap in their mouths.” They only wanted to use this rather severe punishment after numerous warnings, but things were escalating out of control. The kids were spreading their potty talk around the neighborhood – eliciting giggles from their friends, frowns from those kids’ parents, and embarrassment for John and Patti.

As we problem-solved this issue during our first session, we talked about two important truths that were under the surface of this crazy situation:

John and Patti realized that in making this issue a huge battleground with their kids, they were focusing most of their energy on punishing and controlling their children rather than teaching them how to behave instead. We came up with a new “truth statement” to frame the situation: “I can teach my kids respectful boundaries in helpful ways that aren’t controlling or shaming.”

We also realized that there were a couple of “gifts gone awry” underneath this misbehavior: the kids loved silliness and had a healthy curiosity about bodies! To redirect these gifts in more appropriate, helpful ways, Patti and John decided on two messages they wanted to communicate to their kids:

John and Patti shared their new approach with the kids. “It’s normal for kids your age to be curious about their bodies. You can ask us any questions you want about that. And we love that God has given you a gift of joy and laughter. We’ll help you learn some jokes that you can tell anywhere.” They got a joke book and even taught the oldest child to do knock-knock jokes. When potty talk came out at home, they gave it a light “Oh, you’re having fun” or paid no attention — because home was a safe place to talk about private parts, and it was okay for the kids to work through this phase of curiosity about bodies.

But they also set clear boundaries: “Talking about private body parts is just for families at home. If you do potty talk in the neighborhood, we’ll just go home because that’s where talking about those things is appropriate. Other kids’ parents want to teach kids the same rules and we want to help them keep their private things at home, too.”

Even though John and Patti reminded the boys of this just before they all went to a neighborhood gathering, they were ready for their authority to be tested. Sure enough, Will decided to see what would happen if he did his usual potty talk schtick — and got a loving, no-drama escort back to the house. Staying at home while his brother hung with neighborhood buddies made for some quick learning.

With this thoughtful approach, rather than giving their kids a giant NO all the time, Patti and John got to practice the principle of “no, yes, why” — NO, you can’t talk potty talk out in public, but YES, our family house is a safe place to learn about bodies. WHY? Because God created families to be a safe place to talk about private things. With this approach, they laid important groundwork for their kids to feel safe and comfortable to come to them someday with any personal issues!

In their final coaching session, Patti said, “Potty talk just isn’t a problem in our house anymore.” But even more than that, both Patti and John were transformed from exasperated to purposeful parents by this experience of coming alongside their kids instead of just battling them. As they let go of their counter-productive attempts at control, they rose to true authority in their roles as safe, loving guides for their children.

When you prepare to respond to your kids’ persistent misbehavior (whether potty talk or something else), consider the three steps John and Patti went through:

Do Your Questions Help or Hurt Your Kids?

How to Say “No” to Kids Without the Power Struggles

What To Do When Kids Interrupt Important Conference Calls | Ep. 33