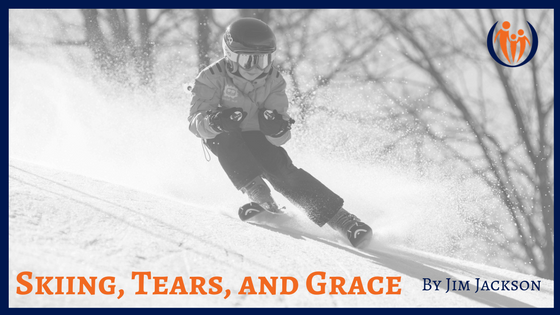 At a recent ski meet I found myself twice in tears for people I’ve never met. The first time was when a young competitor “skied out,” meaning he missed a gate and was disqualified from the race. Nearby his parents gasped and grew visibly angry.

I understand being upset by my kids’ failures. We want what’s best for our kids and when they hurt, for better or worse, we tend to hurt with them when they make mistakes. But these parents weren’t just hurt. They were angry. I later learned that when they met their son following the race they scolded him, saying things like, “Do you know how much we spent to be here! Can’t you concentrate for just one minute?! What is wrong with you!”

I call this “ungrace.” Others call it shame. When I later saw his puffy red eyes and his obvious distress, my eyes grew puffy too. Ungrace makes me cry. It is the opposite of the Gospel. Seeing this unfold inspires my passion for kids to know Grace. It evokes tears.

The second occasion for my tears was similar, but oh so different. A young lady reached the bottom of the hill, finishing the race obviously disappointed in her performance. Her coach greeted her there after watching her run and evident errors. He greeted her with a smile and then said, “You recovered well and really worked it there at the end!” But they both knew she had not skied well. The coach gently put his hands on her shoulders. Her face grew from sad to teary as she explained that she’d worked so hard but still couldn’t get it. He listened intently, understanding her sadness. And he shed a few tears with her.

These were very different tears, shed because the Grace I so desire for youngsters to know was known in this exchange. I so wished it was the grace the young man in the first story could know.

Grace is what I long for and live for. God’s grace. Unmerited. Lavished. Free.

My prayer today is that each parent reading this will know God’s grace so that you can spill it over to your kids.