This post is the first in the series “Discipline that Connects®: Four Powerful Messages All Kids Long to Hear.” 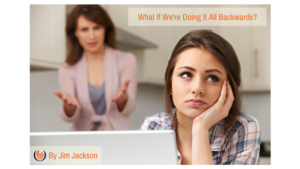 Jeni wants her ten-year-old, Timmy, to be more obedient and responsible. What parent doesn’t want this? So when Timmy disobeys, and doesn’t take responsibility to clean up the kitchen as assigned on his chore chart, she enters the all too common battle of wills to get him to do his job.

“Timmy, please clean up the mess in the kitchen.” No response. Timmy is already glued to the computer screen. Jeni raises her voice. “Timmy! Listen to me! You know the rules. There is no computer until your chores are done, and you’ve left the kitchen a mess again!” She has Timmy’s attention, but he knows from experience that if he stalls long enough, mom might give up. Besides, he hates clearing and cleaning dishes more than any of his chores. He stays glued. “Timmy, are we going to have to go through this again?” Jeni scolds. “You get off that computer right now and clear and rinse the dishes, or I’m unplugging the computer!”

Timmy senses that Jeni means business and responds, “You could at least let me finish the level.” He slumps off his chair as Jeni follows him into the kitchen to be sure he gets a good start.

Satisfied that he knows she means business, Jeni leaves Timmy to finish, thinking to herself, “That was easier than last time. Maybe he’s finally starting to feel responsible for his jobs.”

Based on what we observe with parents like Jeni, it seems parents believe that if they work hard enough to get kids to behave, their kids will somehow embrace the value of obedience and responsibility.

What if we’ve got it backwards?

In the effort to give Timmy a sense of responsibility, Jeni actually chiseled away his sense of responsibility. By nagging until Timmy gave in, Jeni communicated a subtle message to Timmy, “Timmy, you are irresponsible. You are a pain. You’re not worth my respectful effort.” Or, “You need me to nag you to motivate you.” By focusing on getting Timmy to behave responsibly, Jeni missed the most important goal, to communicate to Timmy the message, “You are responsible!” She focused on behavior first, with the hopes the beliefs would follow. Jeni got it backwards.

What if, on the way to helping her son behave responsibly, she first remembered and helped Timmy remember what’s true about him, by primarily focusing on the beliefs she wants to instill. For example, what if Jeni made sure not to rush through dinner, but worked to enjoy Timmy while they ate and affirm how much she enjoys being with him? She’d reinforce the belief, “You are loved.” What if she had noticed that on previous nights Timmy grimaced as he rinsed dirty dishes, and she acknowledged that it’s hard for him? She’d communicate the message, “You are understood.” What if during dinner she asked Timmy if there were other chores he’d prefer over doing dishes, and gave him responsibility to work out a plan? She’d promote Timmy’s belief that he is capable and responsible.

Then, would things go differently when it’s time for Timmy to take responsibility for his chores? We think so, because we’ve seen it unfold this way for over twenty years with thousands of parents and kids. When parents put their best thinking and effort into forming their kids’ beliefs, those kids tend to behave responsibly over time because they believe they are capable and responsible.

What messages are you sending?

The “messages” we send kids when they act up powerfully shape their beliefs about themselves. By “messages” we mean not just what is spoken, but what is experienced in the discipline context. For example, if a struggling child is met with a gentle tone and a loving glance, the message sent might be, “you are loved, you matter, you are understood.” Conversely, when a struggling child is met with a furrowed brow and loud exhale, before a word is ever spoken that child receives a message about himself. The message is likely, “you are a problem, a disappointment, or a nuisance.” This is not usually the intent of the parent, but it is what lands on the child.

Of course all parents and caregivers unwittingly communicate messages they don’t intend to communicate, especially when there is trouble or conflict. And sometimes, in spite of the best intentions, the desired messages they want to send don’t land on the discouraged child.

But when parents make a concerted effort over time to communicate messages of love and grace to their kids, rooted and grounded in God’s truth, those children are empowered to believe they are significant and important contributors in God’s kingdom, and they tend to behave accordingly.