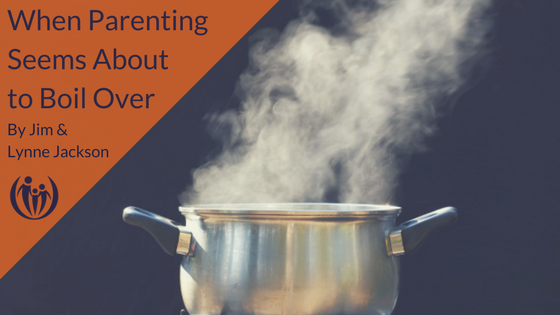 Today we’d like to introduce you to Joel and Amy. We’ve invited them to share their story of learning to parent their two sons.

There is a wise old tale that is told about the frog in the pot. If you put a frog in a pot of boiling water, it will hop out. But, if you start the frog out in a pot of room-temperature water and then turn on the burner, the frog will remain in the pot, not attempting to hop out even when the water is boiling. That’s pretty much how someone could describe our family situation over the years: we just got used to the “water” in our house getting hotter and hotter as we kept trying to control our children and they kept reacting.

Just like the frog in the pot, we didn’t start out boiling. When our oldest son was born, we noticed he was very delayed in all areas during his first year of development and also struggled with many sensory difficulties. From the onset, our parenting included lots of prayer, searching for help and delving into research. We eventually learned that our son had autism.

At the same time our son was officially diagnosed with autism at the age of two, we learned we were pregnant again.

Our early journey parenting two boys was filled with therapies and worries for our oldest son. That’s when we “entered the pot”. As parents, we were working diligently to help our son overcome autism, as well as parent our newborn. At the time our oldest turned three, he had no words. Looking back, we were constantly telling him what to do. “Say, Mmmm!”, “Say, Ba!”, “Say Ooo!”, “Touch blue”, etc., etc. It took a lot of repetition, God’s grace, and His provision of numerous gifts and talents of caring therapists that worked many hours through intensive therapies. But every time we lost hope, God would show us He was working. We weren’t alone in the pot! Our son began speaking at 5 years old.

I was filled with many fears while questioning my oldest son’s future. What will he do? Will he be able to go to school? Will he live at home his whole life? Will he ever get married? And on and on. This anxiety about my eldest son’s future drove me to be the controlling parent, telling him what to do, stewing and simmering in worry over the years, and parenting my younger son the same way.

I became increasingly exhausted, worn out, burned out, and the easiest thing for me at the time, was just to tell them what to do. “Put your clothes away”, “Don’t do that”, “Take your vitamins”, “Come home before dark”, “You need to do your dishwasher chore time”. Looking back, I see how resentment grew in both my sons. For my older son with autism, his temper rumbled to a boil, with more outbursts, defiance, and tantrums as we headed into the teenage years. My younger son became more quiet, compliant, and somewhat disconnected. We had both ends of the spectrum — defiant and compliant — at the same time.

We all became so frustrated, and our pot began to boil over. We were a mess. And then, God flipped our pot over by introducing us to Connected Families.

Through their parent coaching, my husband and I are learning the importance of what is going on inside of us and how that relates to how we have been parenting, why there’s a disconnect between us and our sons, and why they have been responding the way they have been. We have become aware and sensitive to how our controlling and demanding past relationship with them has contributed to a lack of connection, how our worries and fears have led to them not feeling capable. We now feel that through God’s help we can teach, share and bond with our sons by letting them know that they are loved no matter what and safe from our own past need for control. We are on the journey, and learning a lot, and so very thankful for the help we are getting from Connected Families.

Joel and Amy have been married for 25 years and are raising their two teenage sons in Victoria, MN. They enjoy traveling, great comedy, music, biking, swimming, and boating with their family.