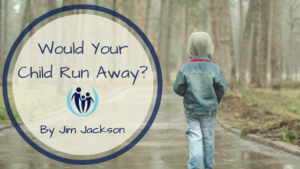 When people steal, disobey, defy, cheat, lash out, or otherwise sin, in their hearts they leave. They leave the safety of trustworthy relationships. They leave the purposes for which God created them.

The way people are treated when they sin determines whether or not they’ll feel safe to return.

At the teen outreach where I served for 12 years, the teens’ participation was voluntary. If these kids didn’t like how they were treated they would literally leave, never to be heard from again. Our own kids may not physically leave, but they leave relationally when they don’t feel safe.

The following experience with Steve at the outreach center taught me much about being safe.

One day I caught Steve stealing. It was a make-or-break situation. If he didn’t feel safe with my response, Steve would almost surely leave.

I had every right to be angry with Steve. But that anger wouldn’t keep him feeling safe. So I prayed. “Lord, give me your grace for Steve.” This short prayer helped me calm down and think more clearly. Grace always flows better through a calm, clear head.

I asked Steve to come into my office. Before addressing the stealing I affirmed him, “Steve, you love coming here don’t you? And we love having you.” I paused and then gently and calmly got to the point. “Steve, I’m going to have you empty your pockets. How much money is there?”

Steve could have fought. He could have denied. He could have stayed silent or run. But I believe that grace made Steve feel safe. He knew I was for him, not against him. He cast his gaze on the floor and told me the amount. He emptied his pockets and handed me the exact amount he’d said. More opportunity for grace.

“Wow,” I said curiously, “you are right on.” Steve seemed stunned, as if the absence of the normal response to his deviance somehow left him off balance. I paused, wondering how to continue in grace without cheapening it.

In that moment I considered and spoke an entirely new thought. “Steve, it occurs to me that in the middle of the bad thing you did, you demonstrated some pretty good skills.” Steve looked confused but interested. “You had a plan in mind and knew how to get it done. Then, you knew to the nickel how much money you’d taken. You seem to have quite a gift for planning, and for handling money. So I want to make you an offer. I’m wondering if you’re willing to try a consequence that puts those skills to better use.”

Steve was all ears.

I continued, “The normal consequence is to be suspended from programs for a month. But if you’re willing, how about if for the next month I teach you to run the snack shop? I’ll teach you inventory control, bookkeeping, and banking.”

Steve was all in.

This approach kept Steve from leaving. In spite of his sin, it wooed Steve back into the safety of my care, and ultimately Steve made a decision in this context to turn to Christ for life.

In a day and age when kids’ hearts are more readily wooed toward trouble than ever before, it’s time to quit taking for granted that our kids won’t run away. They will. If the running away is literal, it is more dangerous than ever. But most kids don’t pack suitcases. They turn on their devices and are bombarded with a myriad of sophisticated, predatory influences seeking to capture their hearts and minds.

If we want to keep our position of influence in their lives, we must learn to be receivers and givers of God’s grace. And we must do the hard work of dispensing that grace early and often, so that our kids will run, through our persistent but imperfect efforts, right into the arms of God’s forever grace.

Do what you can to give kids reasons to stay, not leave. Fight to embody grace.

P.S. Twenty years later Steve co-owns a cafe and has largely overcome the deep dysfunction he grew up in. Grace lasts!