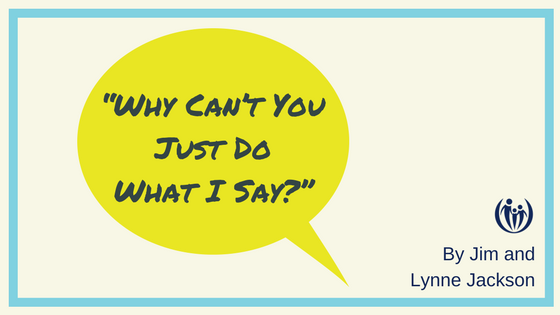 I’m often tempted to discipline my children with the goal of gaining immediate results. While this might get me what I want in the moment, it often leads to greater frustration later because I didn’t really teach the value behind the behavior.

Forced instant compliance often leaves my children feeling powerless, and maybe angry, and makes it harder the next time I deal with the issue.

It is much more helpful to think long-term, focusing on my children’s independence. It helps me to ask this question: “What skills and values am I building now, that will guide my child through adolescence and adulthood?”

Here’s a story we heard from Tara, a mom who used a long-term perspective regarding guiding her son’s choice of music:

Seth’s friend made a CD for him containing a variety of both Christian and secular songs, two of which had swearing and questionable lyrics. I prayed for wisdom because Seth is very sensitive – both easily swayed by his friend and quick to feel guilt or shame when confronted. I knew that demanding him to not listen to the music could drive him toward rebellion. I wanted to be sure to handle this in a way that would encourage his long-term growth, and not just require short-term compliance.

After several days I asked about the CD. He said it was cool. I asked if there were any bad songs on it. He looked defensive, “Well, two of the songs have swear words, but they’re really good songs!” I decided, instead of pronouncing judgment, to ask to listen to them together. He obliged. We listened to the songs and talked about the parts we liked. I affirmed that the songs were upbeat and fun. I noticed and commented that Seth really seemed to like the rhythm. Then we talked about the swearing and its impact on our hearts when we hear it repeatedly, and compared that to the verse of Scripture that says “whatever is good, right, pure, honorable, …think on these things” (Philippians 4:8).  I told him it was important for him to learn to make wise decisions on his own and that I wouldn’t tell him what to do. He still was struggling with the decision, so he agreed when I suggested we take a few days to pray about it.

I asked the Lord to speak to Seth’s heart and give me helpful insight. After a few days we talked about it again. I affirmed my love for him and confidence in him.  He hugged me and said he was sorry. I haven’t heard those songs since.

Tara took authority to raise the issue and teach Biblical perspective, without controlling Seth. This affirmed his growing independence. Her connection with him, her affirmation of his capabilities and her statement that she “wouldn’t tell him what to do” had him feeling honored. Kids who feel honored almost always make honoring choices.

Remember: It’s their life – it’s their feelings, their relationships, their responsibilities, and their faith. And it’s our job as parents not to control their decisions and actions, but to guide them into deciding and acting honorably for themselves.