The Big Do Over 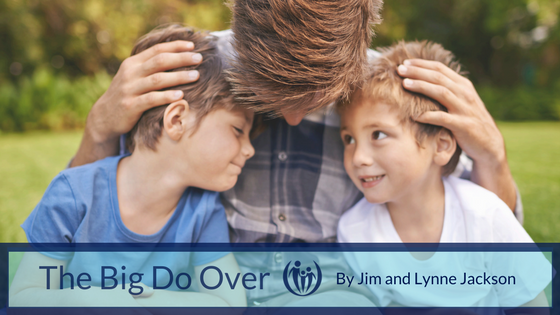 Recently we received this story from Joel and Amy Nelson, parents of two sons, who have previously shared their story here. Enjoy!

Parenting may not come with a manual, but I sure have read a lot of the parenting books out there! One common message that I encountered in my reading was, in all that you do, “be consistent”.

This logic was all well and good, except when I was not in a good place to address the situation calmly because of what was going on inside of me – exasperation, frustration, or just plain being tired and worn out from a day. If one of my sons challenged me during these times, it was “game on”.

It typically would start with me giving a consequence just because I was mad. “If you do that one more time, you will lose (insert favorite item here) for one day.” Then, if there was any whining, it was, “OK, that’s two days!” Then after the pouty huffing, “OK, one week, do you want more?” Then after the slammed door, “OK, A MONTH!!!” And then, there I was — stuck in the consequences I had given, having to “be consistent” and follow through.

Well, I was a consistent parent. But at the cost of the relationship! I knew I was taking away an item or privilege that was in no way connected to the issue or situation. If I had been in my child’s shoes, I might have gotten upset, too.

When our family started learning and getting help from Connected Families, change was harder for me. I knew I wanted to start with staying calm and understanding what was going on inside of me, but I was having a tough time in the moment. Especially when there were challenges with our teenage son who is overcoming the challenges of autism. Our parenting coach then taught us the concept of the “Do-Over”. When I made un-calm choices and got frustrated and parented out of a negative place, our coach suggested I go back and ask our son for a do-over. The first time I did it, our son looked at me, puzzled, and said, “Okay…” I stepped back, took a breath, and re-did the scene of our interaction from a calmer place, the way I would see Jesus interacting with my son.

Was I being consistent the way so many parenting books had taught me? No. But, then it hit me. When I’ve parented harshly, I would rather model grace than model being consistent with harshness.

And then, the real surprise came. Our son began doing do-overs, too. When he would have meltdowns and didn’t get the response he wanted from us, he would go into his room and after he was calm, he came out and asked us if he could have a “do-over”!

Do I still make mistakes and have challenges? ABSOLUTELY! But, grace is winning in our family. I realized how much that was true, just the other day when our son went riding his bike on an extremely windy day. My husband, our other son, and I were out in the driveway playing basketball when he rode up the driveway. As he rode in we were quite surprised to hear him angrily yell, “IT IS (insert expletive here)ING WINDY!” He then ran in the house and slammed the door.

None of us said anything or went after him into the house, which we would have previously done to be “consistent” in teaching him the message, “You shouldn’t swear”. Several minutes later, he came out and said, “Hey, can I have a do-over?” We smiled and said, “YES!” He smiled back and said, “Hey, it is pretty windy out here!”

That was a big Do-Over!