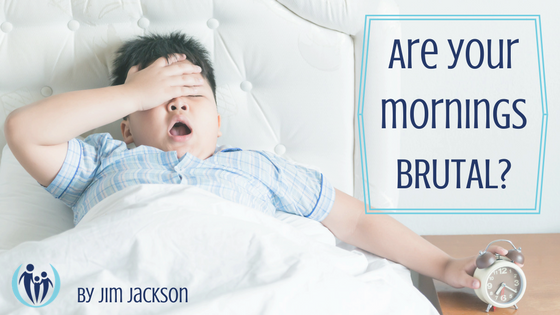 John was fed up. Like many parents, he came to me looking for a quick fix. No matter what consequences or logic John put in place, his 6th grade son Ben just wouldn’t take responsibility for getting himself up and moving, and out the door on time for school.

He told me that everything he’d tried had failed.

Rather than talking about the behavior, I asked him, “Does Ben know beyond a shadow of a doubt that you love him?”

“Of course he does.” John snapped.

“If I was Ben, what would I say is the first thing dad does in the morning to let me know that I’m loved?”

“That might help.” I said. “What would happen if you showed him?”

“Don’t you think that would just reward him?”

A week later John was aglow. “The day after we talked, I went in to my son as his alarm rang, shook him gently until he groaned, kissed his cheek, and just said, ‘Good morning. Love ya,’ and left. A couple minutes later, I went in and asked if he needed more encouragement to get up. He seemed indifferent, so I sat down on the bed and started joking around with him. I tickled him a bit, and he seemed to like it. We ended up in a little tickle war. Then I said, ‘Welcome to the day. See you in the kitchen,’ and I left. Minutes later he was in the kitchen with enough time to actually sit and eat a bowl of cereal. The rest of our morning was pleasant, and he was ready to go with time to spare. Every day since has been the same!”

For John and Ben, it really was that easy. (Click here to read more about delayed obedience!)

John learned what many parents learned when coming to us about behavior challenges. He didn’t need a new strategy — he needed a new goal. John already knew how to be fun-loving and kind. He already knew how to connect lovingly with his son. Things changed when John’s new goal was making sure Ben knew he was loved, no matter what, each morning.

This approach won’t curtail every behavior challenge, but before you look for new strategies, make loving connection your primary goal.

Help! My Anxious Child Cries When Dropped Off at Daycare

My Child Will Not Get Ready for School On Time | Ep. 10

Registration is OPEN!Parent with confidence. Discipline with love.

Don't miss out! The Discipline That Connects With Your Child's Heart online course starts 10/04/2022.