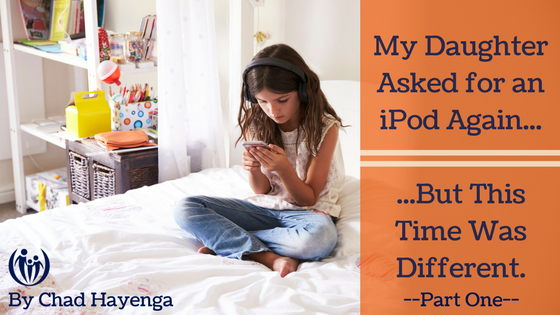 My daughter approached me with a typical question — one I’ve heard one hundred seventy-three times (but who’s counting). “Dad, can I have an iPod Touch?”

But this time, her approach was different.

She made a good pitch — she had an unbelievable opportunity to obtain a friend’s iPod for the extremely reasonable price of $20. Having experienced this conversation with me one hundred and seventy-three times, she came with a written document that detailed her plan to address many of the questions or concerns she thought I would have. I was pleasantly surprised and very impressed!

The document was entitled, “If I got an iPod…” and went like this:

(I didn’t quite understand the last bullet. “The ‘rents can take the iPod away… Who’s that?” I asked. My daughter looked at me like it was a rhetorical question. She raised an eyebrow. I understood completely. That was me! I’m the ‘rent!)

This was it! A moment I had been waiting for and teaching toward for many years: she had taken a proactive approach to asking for something she had wanted. Without badgering, whining and nagging me — and without me lecturing, pleading, or punishing her — she articulated most of my concerns with thoughtful responses to what she knew I would ask her. High Five, girl!

When I coach parents, I often remind them that we as parents aren’t really parenting for change tomorrow, but setting a vision for what the relationship might look like six months or one year from now.

My daughter’s written response to my would-be questions wasn’t an accident. It was actually a response to something we had talked about a few times previously. In essence, the bigger questions that I’d asked: Help me know that you’ve thought through the implications of purchasing this new device. Help me know you are aware of the impact this can have, both pro and con. Answer the questions,

These type of questions help build capacity in our kids to think for themselves. When we are tempted to bark out commands or give lectures, it’s important instead to invite kids into conversation and require them to think.

Stay tuned for Part Two to see how this story ends!