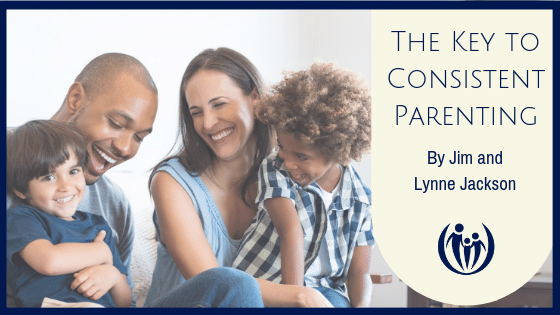 It is often said that consistency is an important key to effective parenting. We agree wholeheartedly.

However, we believe consistency is not so much about the method we choose, but the heart behind the method. If our heart is consistently operating from an abundance of God’s grace and truth in our lives, we can effectively use any variety of methods for dealing with our children’s misbehavior. But if our heart is filled with frustration, fear, or anger, no method for dealing with misbehavior is likely to be effective.

For example: There is a popular teaching that parents should walk away from their tantrumming children, in order to not reinforce the tantrum with attention. If a parent decides to use this method, but has a condescending or angry posture toward the child, the parent may look at the child with an angry “haroomph!” or a disgusted posture or expression. This can communicate the message, “Child, you are a pain! I will fight you until I win this battle!” The child will interpret that the parent is trying to “win.” The child will then learn that the way to “win” in conflict is to act angry and condescending. The child will also likely learn that winning is one way of feeling significant.

But if the parent looks with compassion at the child, and even says, “I can see you’re having a hard time. I’ll come back when you can settle down,” that parent communicates a message of “Child, you are respected. Your emotions are valid. You are capable of calming down before we talk about this.” In this case the tantrum is not awarded with attention, but the message the parent sends the child is that the child is worthy of respect, and capable of working things out once he or she settles down.

Do you see how the same method (ignoring the child), driven by a different heart (condescension vs. caring), can have an entirely different impact on the child?

Consider Lynne’s example of this from the sibling chapter in our book, How to Grow a Connected Family:

Guests were coming, and we were all stressed from cleaning up our messy house. As one child took out frustration on the other, I grew irate with the aggressive behavior. The standard method we used to deal with conflict like this was to calmly and optimistically send the kids to independently work out their differences and to discuss the issue until they both felt ready to meet in the middle for a hug – getting our help only if they got stuck. This time however, I felt pressed for time and angry at the aggressor. I sent them both into the bedroom with a scathing order to quickly resolve the conflict, as I glared at the aggressive child. That child, humiliated by my harsh response, fired a load of hurtful words at the other, resulting in an explosion of tears. When I heard the scream and sobs, my first impulse was to be even angrier, but I knew I had contributed to their problem – I allowed my own emotions and time constraints to set them up for failure. My ensuing apology to the kids set the stage for true reconciliation between them, which I facilitated while Jim engaged our guests. It was a painful but valuable lesson that served me well in future attempts at conflict-resolution training.

That’s the consistency we encourage parents to aim for — not doing things the same way and getting it perfectly right every time, but working toward a heart of compassion and grace when you discipline.

In this example, the “usual method” of sending kids to reconcile independently was rendered impatiently and with a heart of judgment. The child that was glared at received the messages, “You are a problem. It’s your fault. I’m sick of your behavior.” Lynne’s initial contribution led the kids to feel discouraged, and discouraged kids act, well, discouraged. What child would peacefully resolve with a sibling or rectify misbehavior after receiving messages like that? Upon reflection, Lynne was glad she recognized what was happening and staged a bit of a do-over, based on her larger goal of consistently bringing grace to her discipline.