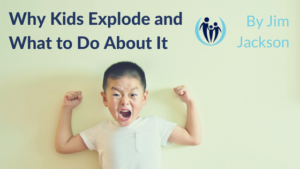 Just like us, our kids sometimes react angrily when something important to them feels attacked. First expressions of anger are almost always aggressive. As kids get old enough to express themselves, the aggression becomes words and actions.

One day I even saw it at the Post Office. A toddler was angry that her mom wouldn’t give her the sucker the postmaster handed out. She chased her mom through the lobby, and when the mom stopped at her P.O. box, the feisty little gal hauled off and whacked her mom. Mom turned quickly with her finger extended and brow furled. “Stop it!” she yelled. It’s a natural response that doesn’t really teach kids anything constructive. But before the mom could say anything else I simply and rather loudly said to the child, “Wow! You’re really mad! You really want that sucker.” I looked right at her from across the lobby and she looked back. I paused for just a second or two. Her mad face immediately softened. I then said, “but you can learn to be nicer when you’re mad.”

The mom looked at me, looking a bit ashamed but also relieved. She then immediately looked at her daughter and calmly said, “Did you hear him? You should be nicer when you’re mad.” She held out her hand and the daughter took it, and they walked quietly out to the car.

Now it could be that the little gal quieted because she was shocked that some ugly old balding man with a grey beard would talk to her that way. But we’ve seen time and time again that when grown-ups can validate their kids’ anger – even aggressive anger – and put words to what the kids feel, it helps the kids feel understood and then settle down. It helps the parents settle too. Then the resolution can be much more constructive.

Unfortunately, the norm is that when kids do the best they know how to express their anger, they are treated in ways that punish or shame them rather than help them learn to understand and better sort through their anger. The mom in the Post office was about to simply yell at her two-year-old and tell her “that’s not OK”. Even a popular Christian parenting site recommends when kids are mad to just tell them to tantrum more, or go to their rooms and scream it out. None of this does anything to value a child and help him or her sort out their feelings. It teaches a “let’s just sweep this under the rug and hope it goes away” approach to anger. Kids don’t learn that anger is an emotion God gives us to help us look at and address what’s important to us. Instead they learn that it’s an emotion to avoid because it gets you in trouble. These kids grow up to be adults and the cycle is repeated.

This isn’t logical at face value, but under the surface it may be the best a child can do to gain a sense of power. So if we’re going to teach our kids to deal well with their anger, we’re going to have to do less work to “just get them to be quiet” and more work to help them understand and express their anger more constructively – in ways that honor God, themselves, and others.Regardless of how old they are, kids do what they’ve learned best gets them a sense of power and control. How do they learn? By experience. The little girl in the Post Office somehow has learned that she gets some sort of payoff when she acts the way she acted with her mother. The payoff may not be apparent, but it is a payoff nevertheless. If by a child’s big tantrum they can get a certain sort of predictable outcome from their parent, that is their payoff. They’ll tantrum until they get it. If the payoff is big angry energy from the parent, it is at least familiar, and may be just what a child needs to feel some sense of control.