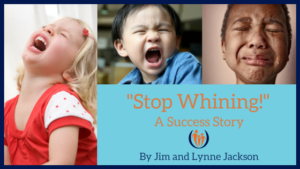 A Thoughtful Approach to Whining

“Whining” is a common problem whether children are toddlers, or teens demanding to get what they want. When parents try to make the whining or demanding stop, it usually backfires. Consider this story from a family we coached regarding the “constant whining” of their son Bryan, who joined their family through adoption.

A few weeks ago my husband Dan read that the feeling behind anger is often fear. We talked a lot about how addressing the fear puts the anger into perspective and makes it easier to deal with. We also talked about how this applied to our kids, and I remembered Lynne’s comment that Bryan seemed like an anxious child; his whining could be a way of coping with his anxiety. This idea stuck with me because I was frustrated and ready for some fresh perspectives!

From early on in his development Bryan would whine in a high-pitched voice frequently throughout the day. We read all the books about how to manage the whining and tried it all.  “Talk to me in a normal voice.” “Go to time out until you can use a regular voice.” “You will lose your favorite ‘stuffy’ when you choose to whine.” We would mostly say these phrases without raising our voices, and calmly follow through on the consequences we’d set. But at the end of the day, there would be a great big pile of confiscated stuffed animals, and he would still be whining. In my weaker moments, I would become exasperated, hold out my hand and firmly say, “Stop, Bryan. Stop that whining voice!” I knew that this big energy and attention was rewarding his whining, but I didn’t know what else to do. Nothing ever really worked – until we started seeing this new perspective.

The next day after our discussion about fear, Bryan was using that high-pitched voice because he could not find a DVD he wanted. Dan tried the ‘Stop whining,” command and it got worse. So we tried a whole new approach: I asked Bryan if he was scared that we would never find the DVD, and he softened and said, “Yes.” I said I would come down and look with him. I got distracted on the way and he came to me with a super calm voice, “Mom, can you come help me find the DVD, please?” I about fell over!  I praised him and took the chance to rephrase Philippians 4:6,7 – “Don’t worry about anything….” We went right to the TV room and found it. Wow, what a difference!!

Since that eye-opening night, we’ve continued to address his underlying anxiety instead of his tone of voice. I calmly say things like, “Wow! I can see you’re really upset about that. It’s hard to be upset isn’t it?” He doesn’t always stop right away and I don’t force it, but within a few minutes, he almost always calms down and accepts some simple teaching or problem-solving about the situation.

This seems so simple, but we have been off base for 5 years. Since the DVD episode I have become more empathetic and affirming (rather than controlling), and he is whining less. He now has whole days now where he doesn’t whine at all! Yeah, God! We talk at the end of the day about much better life goes when he uses his regular voice and tries to figure out what makes him anxious or afraid. We keep talking about how God can only bring his peace when we acknowledge and give him our fears. Now, instead of just trying to stop the whining, which wasn’t working anyway, we are building faith, insight, and problem-solving skills that will last him a lifetime!!

This is an example of how the common approach to something is not the best approach. In this family’s situation, the misbehavior was not what needed addressing. It was Bryan’s underlying anxiety. The primary change needed was not behavioral, but a change in the way this parent viewed the issue, and helped her son start understanding some biblical perspective. Once these changes were made, the behavior improved dramatically. So if you are stuck with some persistent behavior challenge, prayerfully consider what you might address in yourself or in your child that is below the surface of that behavior.