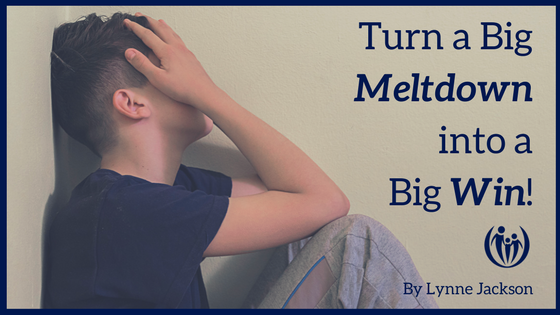 I’ve heard a lot of encouraging stories from parents during coaching sessions, but even I was shocked at this one.

It was the last of four sessions. I had already written about the beginning of Krista and Ted’s story in a parenting tip. So here’s the “Cliff Notes” version of that tip for you, and then the amazing ending I discovered.

During a family ski vacation, 10-year-old Carlie uncharacteristically wanted to take a run on a challenging hill. Things went downhill in a hurry (only not literally) when Carlie fell at the top of the hill, panicked, and then revved herself up into a screaming meltdown – “I can’t get down!” Frustration grew as Ted continued down the hill with Carlie’s sister, leaving Krista behind with a screaming Carlie to endure the gawking stares of other skiers. After what seemed like an eternity to Krista, Carlie finally made her way little by little down the slope.

The meltdown was a low point in the family’s vacation. Krista and Ted were frustrated by the irrational, emotional outburst, and Carlie was ashamed and discouraged — in fact, she refused to go on any more difficult ski runs.

When they told me the story, it was clear they saw it as an all bad experience. Ted and Krista were so invested in this perspective that they couldn’t see the simple good thing that happened: Carlie made it down the hill on her own! As we discussed it in more depth Ted and Krista came to understand that Carlie overcame fear, made a plan, and cautiously and courageously made her way down. Ted and Krista went away from the session determined to better see the good, the little nuggets of success, even in their daughter’s challenges. The starting place would be to reframe their skiing challenge with Carlie to share with her what they’d noticed about the good things behind her meltdown on the slopes.

Fast forward. In their final coaching session, Ted arrived with a big grin. He described his conversation with Carlie and how much she appreciated his positive perspective on their skiing challenge. He then described two specific changes that ensued:

After Ted and Carlie’s conversation they went skiing again. Carlie was eager. “C’mon Dad, let’s go do THE WALL!” Ted was pretty apprehensive, because he knew that The Wall lived up to its name. It was a double black diamond slope — the toughest run there. They stood at the top, staring down at the “skier-eating” moguls and sheer drop. Even Ted was a little unnerved, but Carlie announced, “C’mon, Dad. Go. I’ll come right behind you. Go before I get too scared!” Ted didn’t want to miss this amazing opportunity, so he cautiously headed off. Carlie followed him, took her time and conquered the hill!

So what changed from Carlie’s first ski slope experience to her second? IDENTITY!

In the first situation, she was the weak one, the problem in the family. She wanted to avoid the possibility of feeling so ashamed again, so she avoided any challenge in which she might fail.

Ted’s reframing didn’t give her new information. It gave her a different perspective, and a new identity as an overcomer. Kids gain identity from parents in little bits and pieces all the time, in lots of different kind of situations. The emotion-laden ones have particularly great potential, either positive or negative. In that reframing conversation Ted changed the way Carlie saw herself — and it lifted Carlie’s shame, and gave her a big dose of a healthy, positive identity.

We know (from personal experience!) that when kids freak out over a challenge, have a big meltdown, and frustrate you until you can’t see straight it can be tough to respond well at the time. (We’ve got a few ideas for the heat of the moment.) But we encourage parents, don’t miss the chance to reframe the “failure” or misbehavior later. When heads are cool, you can regroup and take the opportunity to reframe the situation by looking for “whatever is good” and affirming it. It can be a powerful way to build a healthy, grace-filled identity by expressing important messages:

So think of your child’s last big meltdown (or wait for the next one!) and put your focus on however they were able to calm down, and/or solve their problem. Pray for vision to see the good – even in the challenge. Then tell your child what you see. This is how their identity will begin to change from, “I’m a problem” to “I’m an overcomer.” 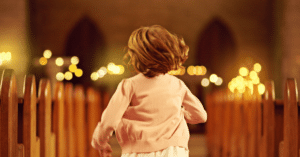 Getting Kids to Behave in Church 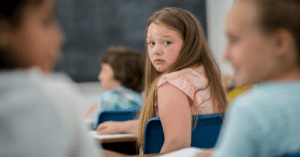 Hurtful Comments: Teach Your Child How to Process and Grow 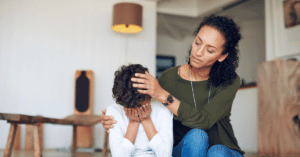