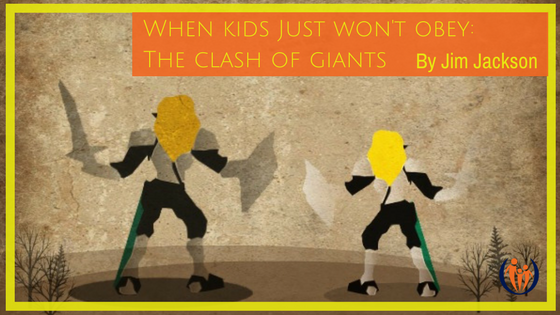 I’ve blown it many times. But the following event stands out as an example of both a failure to live by the stuff I teach, and the power of the teaching. Upon reflection, it’s a tale of battling giants.

One warm afternoon my blooming adolescent son Daniel pushed me beyond my limit. We’d been arguing and the basic conclusion was, “Son, you’re going to do this because I’m the dad!” He didn’t like my conclusion. So he kept arguing. I tend to like when my kids stand up for their beliefs when dealing with others. But not with me.

Old habits can die hard. Like sleeping giants, these habits are disturbed by a child’s intense, unrefined persistence. Daniel was persistent. I dug in my heels. “You keep talking to me this way and you’ll lose privileges!” The giant was stirring and in no mood for further challenge. Daniel backed down. I could see that he was still angry. I was too. But for the moment I was satisfied that my dominance had won out. As I walked past him in our narrow hallway, he stuck his elbow out to jab me, a final declaration of defiance. Turns out there was a mini-giant growing in him, too. I was feeding it.

I reacted quickly. I spun and grabbed his arms. Our angry eyes locked. I squeezed the sensitive flesh just below his biceps. His testosterone and adrenaline rose to the occasion. His strong arms flexed in resistance and he grabbed me in the same manner. His strength surprised me. He leaned into me, ready to face the challenge, whatever it would be. My blood boiled, blocking out all rational thinking. I was not about to back down. Nor was he. Giants, take arms! I felt an impulse to attack, to lift him and throw him on the floor.

In this moment, the only one like it I’ve ever experienced, much of what I’d worked so hard to build into this relationship hung in the balance. But my rage prevented me from seeing it. The giant was wide awake, uglier than I realized, and about to clash swords with a giant-in-training. The giant’s battle cry: “Win at all costs!”

God’s graceful placement of my wife at the end of the hall spoke to our giants, and prevented me from learning what would happen to me, to our son, and to our relationship if the giants escalated to full-scale war.

I breathed deep. I relaxed my grip. Daniel relaxed his.”No!” Lynne yelled. Her intervention startled us both back to our senses. Giants, to your corners! I knew how I wanted to be, and that this wasn’t it. Because I have been so proactive about growing a vision for the kind of parent I want to be, there was a solid history of loving connection and reconciliation to return to. Lynne’s reminder stirred another giant, a younger, but now bigger, gentler, and steadily-fed giant. A giant of grace.

As my head cleared I could hear the gentle giant speak. “The goal is not to win every battle but to win your son’s respect, and the road to respect travels through humility.” I knew what I had to do.

“I’m sorry.” I said. He was not ready. I offered, “Let’s cool off now, and reconnect a little later.”

I like this gentle giant so much more. No giving up or giving in, but engaging with respect and honor.

I took some time to pray and to invite the giant of God’s spirit to infuse my approach. Again. A half hour later, I went to Daniel’s room to confess how I’d been selfish and controlling, and to affirm that he deserves better from me. I gave him space to listen or tell me he wasn’t ready. He was ready. He made a similar confession. It was a quick and sincere exchange. We reconciled in heartfelt forgiveness. This opened the door to other confessions of times in my life when I’d felt rage to the point of losing control, and how God’s grace got me through them. It became a teaching moment that connected us more deeply, and prepared us for the next time our sleeping giants stirred.

The key to this story is not that you can kill ugly sleeping giants. Our past is never going away. It’s what the Apostle Paul called “another law at work in me,” and the “sin that so easily entangles.” (See Romans 7:23 and Hebrews 12:1.) But in Christ we can defeat those giants when they stir. We can feed a new and eternal giant. Its name is the Holy Spirit within us. Its fruit is love, joy, peace, patience, goodness, kindness, gentleness, faithfulness, and self-control (Galatians 5:22). The more we feed this giant when all is well, the readier it will be to spring to action when all is not well. Even when we blow it. Especially when we blow it.

Does your child struggle with anger? Download our FREE in-depth ebook Helping Kids With Anger. It will provide thoughtful insights and creative ideas to help your struggling child.