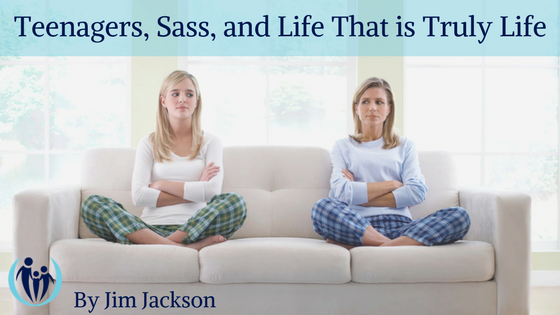 “Are you going to help me or not?” I snapped at Daniel, our fifteen year-old-son. He’d been asking for the past hour to go to a friend’s house. I kept dodging his request while also badgering him to enlist his help in a backyard project I had planned.

“Dad, you’re annoying!” he snapped back. “You keep ignoring me. Get off my back!” I was a bit stunned by his sharp tone. He waited briefly for a response. When none came he folded his arms and announced, “I’m leaving.”

I was at a loss for words. Although he’s definitely a strong-willed young man, this was not typical for him. Kids shouldn’t talk to their parents that way! I thought. I felt defensive and angry. I was tempted to quickly, firmly, and authoritatively “put him in his place.” After all, he was being rude, selfish, and even a bit intimidating. But I was unsure. In my silence he started walking away.

My lack of peace and confidence about how to respond to this was my first clue that perhaps I needed to take a step back and think before acting. Though my first impulse was to angrily demand instant obedience, I paused instead, took a deep breath, tried to clear my head and invite some Holy Spirit wisdom. Something inside told me his was not the only misbehavior here.

As I thought about it, I had to admit that Daniel was right — I was annoying! In my efforts to enlist him, I had been as inconsiderate and selfish as he had. In his own unrefined way, he was calling me on my double-standard. This realization calmed my frustration with him. I still didn’t know what to do or say, but at least now I could make decisions from a calmer, more rational frame of mind.

Wishing for the “right” words to say, I confessed to him, “I’m not sure what to say right now.” Knowing his behavior was a problem I should purposefully address made me want to think some more before deciding how to handle it. I also felt compelled to admit my own bad attitudes. But I wanted to finish my project, and he was eager to go to his friend’s house. I decided to let it go for the time being. “Why don’t you go now, and we’ll figure this out later*,” I said. Then, with another deep breath, I smiled sincerely and proclaimed, “I love you.” He winked back and said, “Thanks. I love you more.”

This is real life. It’s not always smooth and predictable. It can even get downright messy. But it is a life into which I can invite the transforming power of Jesus.

When we invite Jesus into the midst of our messes, our lives can then become lives of authenticity in which the whole family desires to keep growing in vibrant connection to God, to God’s purposes, and to one another. This kind of life is not a destination. It’s a journey. By journeying this way, I can build a solid, connected family that is able to withstand the inevitable difficulties and cultural influences that real life will hold. But so much more than that, I can build a family that knows God’s love deeply and that shares the real life — “life that is truly life” — of Christ with the world around them.

*We did come back and figure it out later.

What are your parenting strengths?

You’ve got them. Knowing your strengths will help you become the best parent you can be. Knowing your parenting challenges is useful information too. Take our FREE ASSESSMENT.