How Punishing Kids’ Anger Could Make It Worse 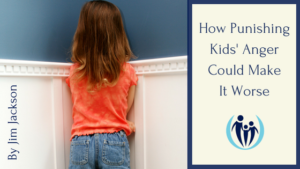 The way parents deal with anger often gives kids the impression that anger is always bad.  Unfortunately, as kids grow up learning that anger is bad, if they aren’t equipped with ways of dealing with their anger, they tend to do one of two things. They either develop the habit of fighting for the sake of gaining control or they build a habit of “fleeing” (avoiding conflict and stuffing feelings) in order to escape the pain of conflict. Psychologists call this “fight or flight.”

Habitual fighters somehow believe there is significance gained in the fight for power and control. They become overtly angry and aggressive about too many things. They react quickly and unreasonably to the things that anger them. Almost every child’s first expressions of anger are some form of fighting. But if kids regularly get sternly confronted or angrily punished for these expressions, they quickly learn from their parents’ example that anger is a weapon. They either keep fighting harder in order to win, or they learn to flee because they know they can’t win.

Kids who flee get quiet. They get sad. They withdraw into worlds of their own and do little if anything to let us know they’re angry. The most troubling thing when kids “take flight” is that at first glance they don’t seem angry. They are often compliant to our requests. They don’t like the requests, or the feel of being controlled, but they don’t have the will or energy to fight. So they give in and coast along. But there is a limit to how much anger they can hold in. So they have to express it somehow.

Then — and here’s where it can get goofy fast — kids often learn to combine the fight and flight responses by doing both at the same time. It’s what psychologists call passive/aggressive. Kids’ anger goes “underground,” meaning that when they act angry, we don’t really know what the anger is about. The kids in this mode angrily damage things (because things are easier to control than people – and they don’t fight back). They yell at their sister when they’re mad at mom or dad. They do things in public to embarrass their parents. At the extreme, passive/aggressive people vandalize. They inflict hurt on one group of people by harming another. They can become inexplicably violent. Or they may even take their own lives in sheer hopelessness. Think of our most violent news stories. These are almost all passive/aggressive anger expressions. It’s hard to get a handle on this kind of anger expression because by the time it gets expressed there is much history and baggage and unresolved anger from the past.

Whether that anger is expressed by fighting, fleeing, or in passive/aggressive ways, a parent’s job is to teach our kids better ways to express their anger. We want them to learn to state their anger respectfully and to constructively learn to reconcile their conflicts.

If you put this all on a spectrum, it looks like this:

Wherever a child’s expression of anger lands on this spectrum, the goal of wise anger education is to help kids make progress toward the right side of the spectrum – learning first to be assertive, and then gradually learning to be restorative. And here’s where we find a big problem when it comes to parents teaching their kids about anger.

As mentioned, kids’ first expressions of anger are almost always aggressive — some form of fighting or tantrum. It falls somewhere on the middle of the spectrum and it’s almost always ugly and unrefined. It’s the best they know how to do, but parents almost always punish it! Instead of constructively helping a child make progress toward the right side of the spectrum, they send messages that anger is not OK. This actually inclines a child toward the left side. They become more hurtful, more silent, or more indirect, because they’re not learning new skills for expressing anger and they’re bottling up the angry feelings.

The first step in teaching our kids to more constructively express their anger is to simply validate it by energetically saying, “You’re angry right now, aren’t you!” This will immediately help a child feel joined instead of opposed and ashamed. You can go on, “I understand! I get angry too sometimes!” This sort of approach almost always takes the wind out of a child’s anger sails. It helps them feel angry without gaining them power and control. As this becomes a habit, it teaches kids that there is “grace space” to wind down and more appropriately express what’s going on inside of them. Then you can begin to invite them to the right side of the spectrum. Like this, “How could you be more respectful when you’re angry? Can you say what you want? Can you give me your ideas about how to solve this?”

These few phrases have helped thousands of parents turn the corner on anger issues with their kids. At first this approach may not be as easy as it sounds. But over time, as kids grow to believe that you are with them and not against them, they will learn to be more respectful — to be angry, and sin not. They will learn to trust your guidance and watch your example. It can be hard work to be this thoughtful about it, but it is well worth it.

Success! Now check your email to confirm your subscription.

Check your email inbox in about five minutes for a confirmation message. If you don't receive it, check your spam folder and whitelist info@connectedfamilies.org. If it isn't there, you likely accidentally gave us an incorrect address. Oops! Try again! :-)